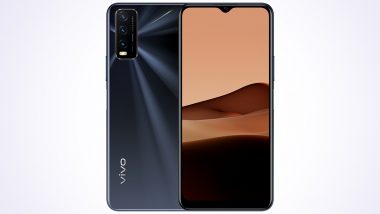 Hong Kong: After cargo pallets containing Vivo Y20 smartphones caught fire at Hong Kong airport this week, a major cargo airline has reportedly announced a ban on Vivo phones. According to Android Authority, Chinese smartphone maker Vivo has confirmed that it is investigating the cause of the fire. Vivo X60 Series Smartphones Launched, Priced in India From Rs 37,990.

"We noticed that a shipment of goods, some of which were Vivo products, got burned on the parking apron of Hong Kong International Airport on April 11," Android Authority quoted the company as saying. "We have paid high attention and immediately set up a special team to work closely with the local authorities to determine its cause," it added, saying it would keep the media and public informed of any development.

The report, citing The Standard, said that the cargo fire occurred on the airport's apron just before the pallets containing Vivo Y20 phones and associated accessories were due to be loaded into a Hong Kong Air Cargo plane bound for Thailand. Several industry outlets have since reported that Hong Kong Air Cargo has banned Vivo devices and two air freight companies until further notice, the report said. The cause of the fire is not known yet, but lithium-ion batteries used in smartphones can cause fires if they are defective or damaged, it added.

(The above story first appeared on LatestLY on Apr 13, 2021 06:10 PM IST. For more news and updates on politics, world, sports, entertainment and lifestyle, log on to our website latestly.com).