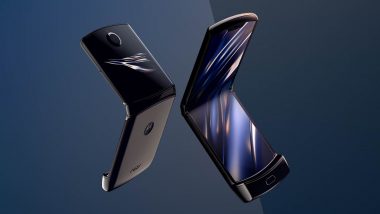 Motorola, the Lenovo-owned smartphone brand, is gearing up to launch its foldable smartphone - RAZR 2019 in the Indian market soon. The company went ahead and teased the foldable phone on its official Twitter account hinting that the phone will be making its India debut soon. As a reminder, the Motorola RAZR 2019 was launched in the global market last month. Now, the foldable phone is all set to hit the Indian shores. Moreover, the phone is rumoured to arrive in the US by early next month .i.e. January 2020. Motorola RAZR 2019 vs Samsung Galaxy Fold - Comparison.

When launched, the foldable phone will be pitted against the likes of Huawei Mate X, and Samsung Galaxy Fold as both the devices come with a foldable screen. Moreover, the Motorola RAZR 2019 also comes with a secondary display that is dubbed as a Quick View Panel by the company. The secondary panel can be used for accessing notifications, Google Assistant, music controls and much more.

The company officially teased the smartphone via its official Twitter account revealing that the Motorola RAZR 2019 smartphone will be coming to India soon. Moreover, the teaser video of the Motorola RAZR doesn't reveal any concrete release or pricing information. The company also introduced the registration page of the smartphone on its official India website wherein the customers can register regarding the updates. Motorola One Hyper With 4000mAh Battery & 32MP Pop-Up Selfie Camera Launched.

As far as the pricing is concerned, the company hasn't revealed the prices of Motorola RAZR 2019 in India. It is speculated that the India prices of Motorola RAZR will be inline with the US-spec model. The device is priced at $1,499 (around Rs 1.06 lakh) which is comparatively lower than its arch-rival - Galaxy Fold that is already on sale at $1,980 (approximately Rs 1.4 lakh). Moreover, the Galaxy Fold smartphone is already on sale in India at Rs 1.65 lakh.

The iconic #motorolarazr that's built to match your style. Get ready to #feeltheflip of #razr, soon in India. Register now and #bethefirst to know all about it. https://t.co/PEWSO8uzsQ pic.twitter.com/7J3tAONIBy

Coming to the specifications, the Motorola RAZR 2019 comes with a 6.2-inch flexible OLED HD+ display with an aspect ratio of 21:9 that is capable of folding in half. Moreover, the phone also sports a secondary display which is a 2.7-inch Quick View display that can be employed for capturing selfie, view notifications, and more. The phone is powered by an octa-core chipset from Qualcomm which is a Snapdragon 710 SoC that comes mated to a 6GB of RAM.

For photography, the Motorola Razr (2019) sports a 16MP primary sensor with f/1.7 of aperture. The camera can be used to capturing selfies when folded or as a primary sensor in the unfolded state. Moreover, there is also a 5MP secondary shooter embedded in the display notch. The smartphone comes equipped with a fingerprint sensor, which is accessible irrespective the device is folded or not. Additionally, the RAZR 2019 phone packs a 2,510mAh battery supporting 15W fast charging technology.

(The above story first appeared on LatestLY on Dec 14, 2019 05:22 PM IST. For more news and updates on politics, world, sports, entertainment and lifestyle, log on to our website latestly.com).