Nothing’s Ear 1 Wireless Earbuds To Be Launched Next Month

Nothing, the new tech start-up from ex-OnePlus Co-founder Carl Pei officially announced today to launch its upcoming product. The upcoming product will be a pair of truly wireless earbuds called Ear 1. 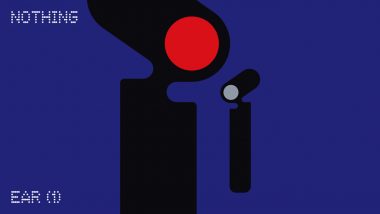 Nothing, the new tech start-up from ex-OnePlus Co-founder Carl Pei officially announced today to launch its upcoming product. The upcoming product will be a pair of truly wireless earbuds called Ear 1. The company revealed the illustration of its upcoming earbuds on its official Twitter handle. Nothing has not revealed the exact date of Ear 1's launch but it has been teased to be launched in June 2021. As a reminder, Nothing was formed in October last year by Carl Pei after resigning from OnePlus and the early concepts for the Ear 1 came up around winter in 2020. Carl Pei’s Nothing To Be Led by Ex-Samsung Executive Manu Sharma.

The company has not revealed any details about the specifications and final design of its upcoming earbuds. A report has claimed that Ear 1 is likely to get a transparent look with an iconic form and refined functionality.

The sound of change. #Ear1 coming this June: https://t.co/QXza1nS5Fo pic.twitter.com/9Bxmp9jTei

Nothing believes that Ear 1 is a starting point that will define the artistry, confidence and craftsmanship that will carry our products and services for years to come. In March 2021, the company unveiled its Concept 1 earbuds hinting about how its audio product will look like.

The company aims to remove barriers between people and technology to create a seamless digital future that looks, live and feels like nothing. Nothing also revealed why it choose to make audio products - for the love of music, podcasts and audiobooks. Nothing even acquired Essential which is a phone brand founded by Android co-creator Andy Rubin. The company is expected to announce more audio products in future but currently, we expect the company to release more details about Ear 1 wireless earbuds before its official launch.

(The above story first appeared on LatestLY on May 11, 2021 04:10 PM IST. For more news and updates on politics, world, sports, entertainment and lifestyle, log on to our website latestly.com).