Samsung Galaxy Fold 2 Likely To Be Launched Later This Year; May Ditch The S-Pen

It is expected to hit the market in Q3 2020, and may be launched alongside the Samsung Galaxy Note 20 in August. 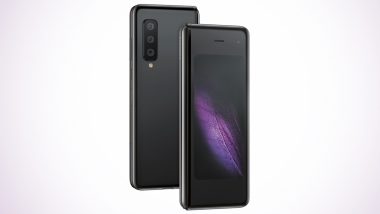 Seoul, April 15: Samsung is expected to launch the Galaxy Fold 2 later this year and the device may come in martian green as well as astro blue colour variants, ditching the S-Pen this time. The phone will have a slightly bigger screen but will keep the form factor as well as the folding technology, reports GSMArena. The company is reportedly planning to start manufacturing components in May, and is looking at starting mass-producing the device in June/July. Samsung Galaxy Fold 2 Will Be Called Galaxy Bloom; Confirmed To Launch Alongside Galaxy S20 on February 11.

It is expected to hit the market in Q3 2020, and may be launched alongside the Samsung Galaxy Note 20 in August. Galaxy Fold 2 can offer a larger cover display than the 4.6-inch screen on the original Samsung Galaxy Fold. The size of the foldable display of the second generation phone may be increased to 7.7-inch compared to Galaxy Fold's 7.3-inches. Samsung Galaxy Fold 2 May Feature Ultra Thin Glass Display: Report.

The phone will be available in two models with a more affordable 256GB one and a slightly expensive 512 GB model. The next Fold may also adopt the same camera array as the S20 Plus, which includes a 64MP telephoto camera and may get a punch-hole instead of a notch. It will be the company's third foldable Android handset and will come after the company announced the Galaxy Z Flip and the Galaxy Fold.

(The above story first appeared on LatestLY on Apr 15, 2020 03:48 PM IST. For more news and updates on politics, world, sports, entertainment and lifestyle, log on to our website latestly.com).