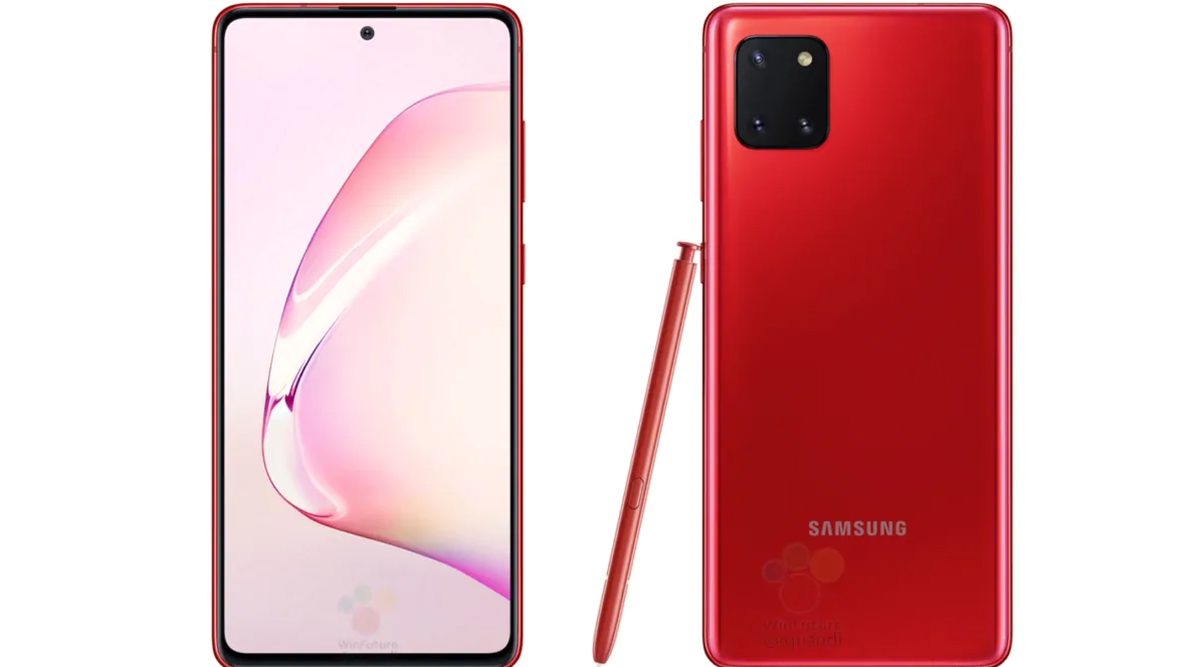 Samsung, the South Korean electronics giant reportedly will be introducing the Galaxy Note 10 Lite smartphone by next month. New leaks concerned with the Galaxy Note 10 Lite has been surfacing on the internet for the past few weeks. Now, a fresh render image emerged online revealing vital specifications of the smartphone. According to the leaked render picture, the Samsung Galaxy Note 10 Lite is tipped to get in-house developed Exynos 9810 SoC, triple rear camera and a massive 4,500mAh battery.  It is also reported that the smartphone will be available for sale in the European market from the second week of next year. Samsung Galaxy S10 Series, Galaxy M20, OnePlus 6 & OnePlus 6T Smartphones Added To The List of Airtel Wi-Fi Calling Service.

Courtesy of WinFuture, the render image hints that the Galaxy Note 10 Lite will sport a massive 6.7-inch FHD+ flat AMOLED display screen with a resolution of 1080x2400 pixels. Also sporting a hole-punch, the screen will carry 398 PPI of pixel density and blue-light filter. The device will get in-house developed Exynos 9810 SoC clocked at 2.7GHz. Moreover, the chipset will be clubbed paired with 6GB of RAM and 128GB of internal storage with memory expansion provision up to 512GB via microSD card. The phone will run on Android 10 based on One UI 2.0 on the top. Weekly Tech News Roundup: Apple iPhone SE2, Vivo V17, Samsung Galaxy A51, Realme Buds Air, Apple MacBook Pro, Oppo Reno 3 Series & More.

For photography, there could be a triple camera module at the back of the Samsung Galaxy Note 10 Lite. The setup is said to comprise a 12MP primary sensor with dual pixel autofocus along with a 12MP ultra-wide angle lens and a 12MP telephoto snapper with 2x optical zoom. At the front, the phone will get a 32MP selfie shooter with an f/2.0 lens. The camera module will also sport 4K video recording at 60fps and an ultra-slow motion mode. Moreover, the smartphone is also expected to come with an S Pen as being a Galaxy Note-series phone. Samsung Galaxy S11 Series To Launch On February 18 Next Year; Expected Prices, Features & Specs.

The reports also indicate that there will be a 4,500mAh battery with 25W fast charging technology. However, the phone will be missing out on wireless charging support. On the connectivity front, the phone will comprise of 4G LTE, Bluetooth 5.0, NFC, dual-band Wi-Fi, 3.5mm headphone jack, GPS and more. The phone will also get an in-display fingerprint scanner for authentication. Samsung Galaxy Fold 2 To Come With Ultra Thin Glass Display; Likely To Be Launched On February 18, 2020.

The tech giant is likely to launch the new Galaxy Note 10 Lite by the first week of January. Previously, reports claimed that Samsung would launch Galaxy Note 10 Lite in December.  As far as the prices are concerned, the company will be looking to price the smartphone at EUR 609 (around Rs 48,000). And, the phone reportedly will go on sale starting January 10. It is important to note that there is no official word about the device's availability in other markets including India.