Samsung Galaxy S20 Series Reportedly To Be Available in India For Pre-order From Tomorrow; Likely To Priced From Rs 70,000 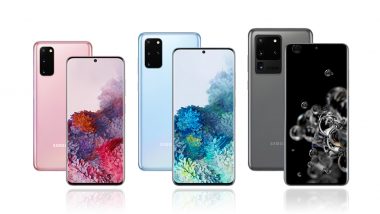 Meanwhile, Samsung' second foldable smartphone Galaxy Z Flip will arrive in India next week and is likely to be priced between Rs 1.10 lakh to Rs 1.25 lakh. According to sources, pre-bookings for the bold and stylish Galaxy Z Flip would start from February 21. Galaxy Z Flip, Samsung's second foldable smartphone after Galaxy Fold that costs Rs 1.65 lakh, was launched for $1,380 along with the premium Galaxy S20 series globally in San Francisco on February 11.

Like Galaxy Fold, Samsung would sell Galaxy Z Flip through pre-orders in India as the devices are available in limited quantities. Deliveries of Galaxy Z Flip could start as early as last week of February for the early birds in India, according to the industry sources. The Galaxy S20 series - S20, S20+ and S20 Ultra -- feature several industry-leading camera innovations. Galaxy S20 and S20+ have a 64MP camera while Galaxy S20 Ultra sports a 108MP camera. Samsung Galaxy S20 Series & Galaxy Buds+ Officially Launched; Galaxy S20 Ultra To Be Offered With 16GB RAM.

The devices have groundbreaking zoom capability. The users will be able to use up to 30X zoom on the Galaxy S20 and S20+ and can experience Super Resolution Zoom up to 100X with a clearer view than before on the S20 Ultra. The Galaxy S20 series comes with a 25W fast charger (S20 Ultra supports 45W superfast charging). S20 houses 4000mAh battery, S20+ has 4,500mAh battery while Ultra has a huge 5,000mAh battery. The entire series is equipped with massive storage -- S20 in 128GB variant LTE version with 8GB variant while S20+ and S20 Ultra come in 128GB, 256GB and 512GB variants.

(The above story first appeared on LatestLY on Feb 13, 2020 10:47 AM IST. For more news and updates on politics, world, sports, entertainment and lifestyle, log on to our website latestly.com).