According to the Miami-based forecaster, the hurricane is now located about 15 miles (25 km) south-southwest of Great Inagua Island with maximum sustained winds of 80 miles (130 km) per hour. 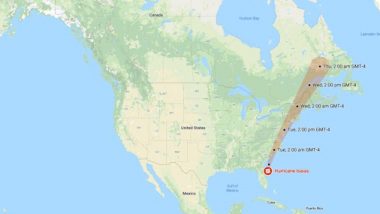 Washington, August 3: Hurricane Isaias approached the Carolinas on Monday after it wrecked havoc in Florida's east coast on Sunday. Reports inform that several parts of Carolinas have been witnessing heavy rainfall and storm surge. The weather agencies have also alerted people of the region for possible tornadoes on Monday, August 3. The U.S. National Hurricane Center (NHC) had on Friday said in its advisory that the tropical storm was to move near or east of the Florida peninsula over the weekend. Earlier, Isaias wrecked havoc in Haiti and the Dominican Republic and crippled normal life of hundreds of thousands of people. Hurricane Isaias LIVE Tracker.

On Monday, the Hurricane center said the center of Isaias will then move offshore of the coast of Georgia and southern South Carolina later today, move inland over eastern South Carolina or southern North Carolina tonight and move along the coast of the mid-Atlantic states on Tuesday. Reports inform that a tropical storm warning was in effect from the Volusia/Brevard County Line in Florida to Fenwick Island, Delaware, and included Pamlico and Albemarle Sounds in North Carolina, as well as Chesapeake Bay southward from Smith Point.

The National Hurricane Center (NHC) upgraded the storm to a hurricane on Friday morning. Following this, the tropical storm warnings were upgraded to hurricane warnings for Bahamas, Florida and other regions of the US East Coast.

Reports inform that Isaias is expected to hit the US East Coast by the weekend as it approached the Bahamas on Friday. Several parts of Bahamas are still recovering from the devastation of Hurricane Dorian that devastated the region in 2019. The NHC informed that heavy rains may begin to affect South and east-Central Florida beginning late Friday night, and the eastern Carolinas by early next week. Track Hurricane Isaias Live Here.

LUNCH UPDATE | The latest track for hurricane #Isaias. See what has changed since the morning's update on CBS47 @actionnewsjax at Noon. #FLwx #FirstAlertWX pic.twitter.com/qzYfbtn3rD

The tropical Storm Isaias formed in the Atlantic Ocean on Wednesday. The storm triggered panic and prompted forecasters to issue a tropical storm warning for several islands in the Caribbean. Tropical storm warnings were issued for the Turks and Caicos Islands and portions of the Dominican Republic, Haiti and the Bahamas. The East Coast of Florida from Ocean Reef to Sebastian Inlet is also on alert. Isaias is the earliest ninth Atlantic named storm to form, according to Colorado State University hurricane researcher Phil Klotzbach. The previous record was Irene on August 7, 2005.

(The above story first appeared on LatestLY on Aug 03, 2020 03:43 PM IST. For more news and updates on politics, world, sports, entertainment and lifestyle, log on to our website latestly.com).