Lunar Eclipse 2022 Live Streaming: When and Where To Watch the 'Super Flower Blood Moon' in India 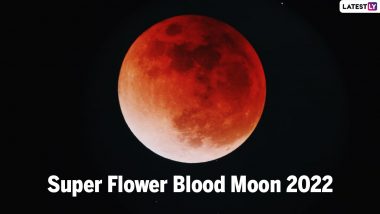 A supermoon is most commonly defined as any "full moon that occurs when the Moon is at least 90% of perigee". The most exciting part of this year's lunar eclipse is the fact that the month's full moon falls on the same day as the total lunar eclipse. ‘Super Flower Blood Moon’ Lunar Eclipse 2022: Know Date, Time and Live Streaming Online Details Related to Celestial Event.

According to reports, the lunar eclipse will mostly be visible on May 16 between 8.30 am and 9.30 am IST. However, there's a catch. The "super flower blood moon" will not be visible to viewers in India. Having said that, people in India can still watch the live stream of the lunar eclipse from across the globe.

As per NASA, "viewers in the Eastern U.S. will see the eclipse begin with the moon well above the horizon, while those in the central part of the country will see it start about an hour and a half after dark. So, if you want to catch a glimpse of the lunar eclipse, keep a track of NASA as the space agency will go 'Live' from its social media channels in order to show people the "Super Flower Blood Moon" on the night of May 16.

Psst! Want to see a total lunar eclipse? Watch #NASAScienceLive on May 15 when Earth sneaks between the Moon and the Sun.

No matter where you are, or if your skies are clear, you can watch with us and @NASAMoon experts ready to answer your questions: https://t.co/oA5JWRRMx1 pic.twitter.com/Dcj9LG4aaJ

If reports are to be believed, NASA will be live-streaming the lunar eclipse moment from 8:30 am IST to 9:30 pm IST on May 16. "Go outside with NASA and watch the total lunar eclipse! On the evening of May 15, Earth will pass between the Sun and the Moon, blocking sunlight and casting a shadow on the lunar surface," NASA's live streaming video stated.

The Lunar Eclipse 2022 live stream can be watched on YouTube, Facebook, NASA Television, and even on NASA.gov/live. Besides, citizens in India can also watch the "Super Flower Blood Moon Lunar Eclipse" on the YouTube channel of timeanddate.com.

However, if you miss watching the Lunar Eclipse 2022 then the next one is most likely to take place in November this year.

(The above story first appeared on LatestLY on May 15, 2022 09:46 PM IST. For more news and updates on politics, world, sports, entertainment and lifestyle, log on to our website latestly.com).