TechGlare Deals Is Where You Should Go Shopping, if You Are Looking for an Ad-Free Platform

Shopping enthusiasts thronging the eCommerce space have a common complaint. Whenever they visit online shopping websites to look for products they would love to own, their ease of picking deals are marred by the ever popping up advertisements all along. This has forced many to even quit. 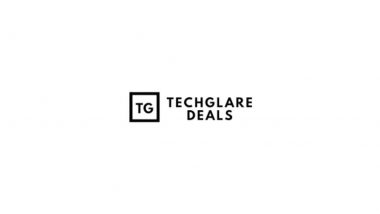 Shopping enthusiasts thronging the eCommerce space have a common complaint.  Whenever they visit online shopping websites to look for products they would love to own, their ease of picking deals are marred by the ever popping up advertisements all along. This has forced many to even quit.

After having seen a good amount of growth, TechGlare Deals has successfully managed to stay among the best online shopping websites that offer exciting deals. With the ad-free interface also in place, the company has ensured that eCommerce enthusiasts never ditch the website as they go on a quest to find the best deals. This is because they will find zero advertisements on TechGlare Deals pages, and they can go about making online shopping an exhilarating experience.

According to Harikiran Kodaganti, Head, TechGlare Deals, “We are a shopping website that has on our menu a set of regularly refreshed deals. Further, we offer pages that are completely advertisement-free, thus providing a hassle-free shopping experience. This is because we have realized that surfing through enticing deals becomes difficult when ads continue to pop up in irritating measure. By keeping its pages ad-free, TechGlare Deals has ensured that navigation is smoother and easier for online shoppers who arrive to look at and own the best deals”.

TechGlare Deals has also brought to the fore its own Android App so as to ease the process of searching for deals and placing orders. The innumerable followers who have been using the app since a short period of time have stood testimony to the fact that the deals on display are the ones they actually want.

The company looks to be a publisher of the Best Deals available on the online shopping space by offering customers a clean platform that has no irksome advertisements. What a shopping enthusiast would find on its pages are discounted prices and no irksome ads.

Shopping enthusiasts who arrive online would be happy to surf through its clutter-free pages. The basic idea is to bring a shopping experience to customers who do not want to be perturbed by the unnecessary popping up of ads and ad links. The deals are prominently displayed without any advertisement in between, and that makes navigation effortless and hassle-free.

An array of deals showcased for the shopping enthusiast

TechGlare Deals has four sections in its portfolio that make it easy for online shoppers to look for specific deals and products. The four sections are:

Products on TechGlare Deals are showcased under different product categories such as televisions, washing machines, laptops, mobiles and more. What becomes more fascinating about these TechGlare Deals are that they are strategically placed for the user to pick easily. Further, a search option is provided so that users can look for specific products on offer. The search option also ensures that no good deals are missed.

Products on array at TechGlare Deals, are placed after tracking all deals that appear on popular e-commerce websites at by 12 AM. Right from the moment the deals appear on these websites, TechGlare Deals also starts displaying them on its menu. Further, added deals are posted all through the day at regular frequencies.

TechGlare Deals puts on array a slew of that can be offered to customers who look for them. The price details and availability of the products are showcased for TechGlare Deals audiences so that they can grab them as and when they are displayed. On days of sales festivals, TechGlare also makes it a point to post a deal every 10 minutes.

TechGlare Deals also brings to the fore Online Courses Deals from E-Learning websites such as Udemy and others. Courses are posted when their prices drop. Alerts on free courses are also provided. These apart, offer codes from food delivery companies such as Zomato and Swiggy are also offered via TechGlare Deals.

Towards a noble cause

As part of its social commitment, TechGlare has also ushered a novel service where in people would be able to tag the TechGlare Deals Twitter handle whenever there is a requirement for blood or for financial assistance toward medical treatment. TechGlare would look into such requests to ensure genuineness and make sure the required amounts are donated. The company also would encourage followers to contribute.

TechGlare Deals is aware that social media reaches out to people in much better ways than traditional methods of marketing. In this context, TechGlare’s Twitter and Instagram pages have been readied so as to make it a point that all best deals are listed for followers as soon as they are announced. Customers can download the TechGlare Deals app here and on Twitter here.