Vivo India is all set to launch the highly-anticipated V21 5G smartphone in the country tomorrow at 12 pm IST via Flipkart. 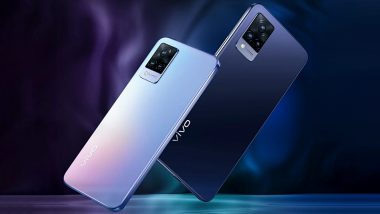 Vivo India is all set to launch the highly-anticipated V21 5G smartphone in the country tomorrow. Interested buyers can get their hands on Vivo's new phone via Flipkart at 12 pm IST. It will be introduced as a successor to V20. Ahead of its launch, it has already been listed on the e-commerce website, revealing key specifications and features. It is important to note that the Vivo V21 series was recently launched in Malaysia. The V21 series for the Malaysian market includes V21 & V21e, however, it remains to be seen if the latter will be launched in India. Vivo V21 5G To Be Launched in India on April 29, 2021: Report.

Specifications-wise, the upcoming Vivo V21 will sport a 6.44-inch FHD+ AMOLED display with a 90Hz refresh rate, 20:9 aspect ratio and a resolution of 1,080×2,404 pixels. The panel also gets a punch-hole cutout housing a 44MP selfie camera. Under the hood, there will be an octa-core MediaTek Dimensity 800U chipset clubbed with 8GB of RAM and 128GB of built-in storage.

For photography, the smartphone will get a triple rear camera module, which is likely to be similar to the predecessor, in terms of design. It will include a 64MP primary camera accompanied by an 8MP wide-angle camera and a 2MP macro shooter. 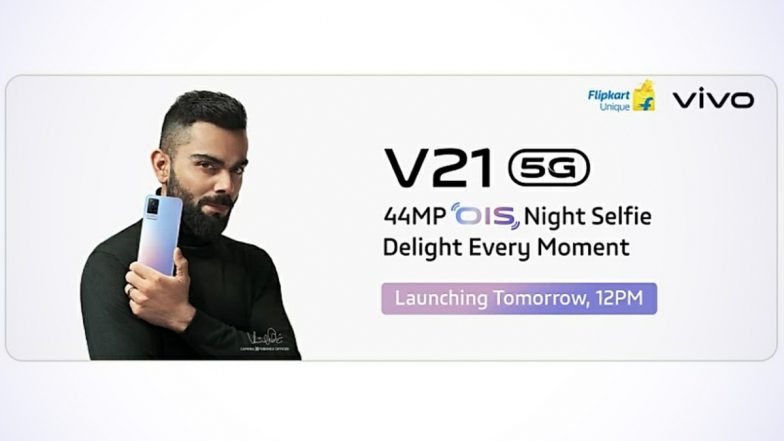 The handset will pack a 4,000mAh battery with a 33W FlashCharge fast charging support. As far as prices are concerned, the Vivo V21 is likely to be priced above Rs 30,000. The 4G derivative of the handset costs MYR 1,599 (which is around Rs 29,000). Notably, the company hasn't announced prices for the 5G model.

(The above story first appeared on LatestLY on Apr 28, 2021 11:31 PM IST. For more news and updates on politics, world, sports, entertainment and lifestyle, log on to our website latestly.com).