Chinese smartphone maker Vivo is all set to launch a new smartphone -- Vivo V21 5G -- in India on April 29. The upcoming Vivo V21 series will initially include two models -- V21 5G and V21e. 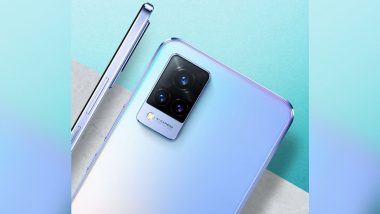 The upcoming smartphone is likely to flaunt a 6.44-inch E3 AMOLED display with a dewdrop notch, 800 nits peak brightness and HDR10+ support. It will be powered by a MediaTek Dimensity 800U SoC coupled with 8GB RAM, the report said.

Are you someone who loves everything stylish just like @jannat_zubair29? Then get ready for the slimmest and the coolest fashion accessory coming to #DelightEveryMoment on 29th April at 12 PM. pic.twitter.com/N0OLDIXoX8

The smartphone will house a triple camera setup consisting of a 64MP primary sensor with OIS, an 8MP ultra-wide unit and a 2MP macro shooter. The smartphone will include a 44MP selfie camera with OIS. On the software front, the Vivo V21 5G will run Android 11 (Funtouch OS 11.x) and will be backed by a 4,000mAh battery with support for 33W fast charging. According to the report, the device will measure 7.29mm in thickness, weigh 176g and will be available in three colors -- sunset dazzle, dusk blue, arctic white.

(The above story first appeared on LatestLY on Apr 26, 2021 09:51 AM IST. For more news and updates on politics, world, sports, entertainment and lifestyle, log on to our website latestly.com).