In a bid to make chats more safer, Meta-owned WhatsApp on Thursday announced a new feature called 'Communities'. The new feature will enable users to bring together separate groups under one umbrella and manage these busy conversations in a secure and private way. 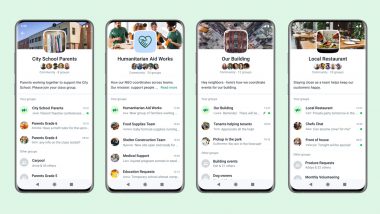 New Delhi: In a bid to make chats more safer, Meta-owned WhatsApp on Thursday announced a new feature called 'Communities' that will enable users to bring together separate groups under one umbrella and manage these busy conversations in a secure and private way. The company said that 'Communities' are protected with end-to-end encryption. WhatsApp Gets NPCI Nod To Extend Payments Service to 100 Million Indian Users.

"Close-knit groups - schools, members of a religious congregation, even businesses - need to be able to have secure and private conversations without WhatsApp monitoring their every word," the company said in a statement.

With the new feature, people can receive updates sent to the entire 'Community' and easily organise smaller discussion groups on what matters to them.

With Communities, you'll be able to bring related groups together in a way that helps you organize meaningful connections easily and privately. pic.twitter.com/eatAZQCmc3

"Communities will also contain powerful new tools for admins, including announcement messages that are sent to everyone and control over which groups can be included," said WhatsApp. "Group admins will be able to remove errant or problematic messages from everyone's chats," said WhatsApp, adding that they are increasing file sharing to support files up to 2GB. "We'll introduce one-tap voice calling for up to 32 people with an all-new design," said the company.

For example, a school principal can bring all parents together to share must-read updates and set up groups about specific classes, extracurricular activities or volunteer needs. The company said it is also making improvements to how groups work on WhatsApp, whether or not they are part of a Community. Emoji reactions are coming to WhatsApp so people can quickly share their opinion without flooding chats with new messages.

(The above story first appeared on LatestLY on Apr 15, 2022 09:58 AM IST. For more news and updates on politics, world, sports, entertainment and lifestyle, log on to our website latestly.com).