Xiaomi Redmi Note 10 Series to Be Launched in March 2021, Teased on Amazon India 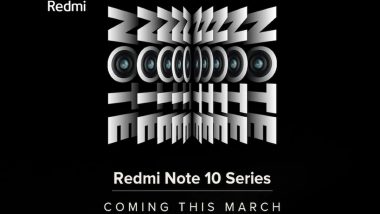 As per the listing, Redmi Note 10 series will be launched next month in India. Xiaomi India chief 'Manu Kumar Jain' also shared a video teaser on its official Twitter. Both Redmi Note 10 and Note 10 Pro are likely to come with 4G and 5G connectivity options. Redmi Note 10 series has reportedly received both the BIS and FCC certifications.

Brace yourselves for a #10on10 experience! RT if you want to know more. 🔁

(The above story first appeared on LatestLY on Feb 11, 2021 09:16 AM IST. For more news and updates on politics, world, sports, entertainment and lifestyle, log on to our website latestly.com).