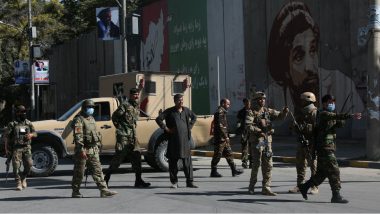 Ghazni, November 29: At least 26 Afghan security personnel were killed in a suicide car bombing in the eastern province of Ghazni. The explosion occurred near an army base. A bomber reportedly detonated a Humvee vehicle full of explosives near the army base. Several security personnel were also injured in the blast. Afghanistan Bombing: Suicide Car Bomb Blast in Balkh Province, 5 Dead, 32 Injured.

The injured personnel were shifted to a nearby hospital. Till now, no terrorist organisation has claimed responsibility for the attack. The explosion occurred on the PD3 of Ghazni city. According to local media, the casualties may rise further. More details are still awaited. Afghanistan Bomb Blast: Bombing in Kabul Kills Ten, Including Children.

On Saturday, The Afghan Defence Ministry has said that the Taliban has intensified attacks across the country in the past week. In a statement on Friday, the Ministry said that in the last 24 hours, there were attacks in at least 23 provinces, reports TOLO News. "The Taliban has kept violence very high, which is against the will of the people of Afghanistan," Fawad Aman, the Ministry's deputy spokesman, was quoted as saying in the statement.

(The above story first appeared on LatestLY on Nov 29, 2020 01:21 PM IST. For more news and updates on politics, world, sports, entertainment and lifestyle, log on to our website latestly.com).