Chaos unfolded at the Hamid Karzai Airport in Kabul on Monday morning as thousands of Afghan nationals rushed to board flights out of the country as Taliban took control. The United States troops reportedly even fired in the air to control the situation. 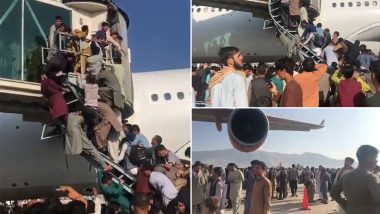 Kabul, August 16: Chaos unfolded at the Hamid Karzai  Airport in Kabul on Monday morning as thousands of Afghan nationals rushed to board flights out of the country as Taliban took control. The United States troops reportedly fired in the air to control the situation. Air India Flight to Kabul was also  cancelled after the Afghan airspace was blocked. The development came hours after the Taliban entered the Presidential Palace.  A video of thousands of Afghan Nationals trying to board flights has also surfaced on social media. Afghanistan Leaders Form Council to Meet Taliban.

After the Taliban's blitzkrieg, Afghan President Ashraf Ghani reportedly fled to Tajikistan. Several nations have even closed their embassies in Afghanistan. Notably, The Taliban militants entered Kabul on August 15, marking the end of the United States' 20 year-long war in Afghanistan against the militant group. In two weeks, the Taliban captured entire Afghanisarn despite the billions of dollars spent by the US and its ally to strengthen Afghan security forces. Afghanistan Crisis: Kabul Residents Flee City, Country on Fears of Taliban Rule.

Here Are Five Developments From Afghanistan:

Afghanistan Air Space Closed: Flights cannot operate from Kabul airport as the airspace has been closed. A NOTAM has been issued in this regard. An Air India flight which was scheduled at 12:30 to Kabul to evacuate people, will not be able to land at the Kabul airport.

Security Guards Flee From Kabul: According to reports, A day after the Taliban declared the country as Islamic Emirate of Afghanistan, streets remained deserted on Monday. Hundreds of civilians were trying to flee the country.

Embassies temporarily Closed in Kabul: The United States, The United Kingdom, South Korea and other nations have temporarily closed their embassies in Kabul as the Taliban took hold of the Afghanistan capital city without a fight.

Taliban Declares War in Afghanistan is Over: The Taliban has declared the war in Afghanistan over after its fighters swept the capital Kabul and President Ashraf Ghani fled the country. Mohammad Naeem, the spokesman for Taliban's political office in Doha, told Al Jazeera that the group did not want to live in isolation and said the type and form of the new government in Afghanistan would be made clear soon.

The situation in Afghanistan worsened further on Sunday, as Kabul was reportedly taken over by the Taliban. Some Afghan lawmakers also fled to Islamabad, including the Speaker of Afghan Parliament and Mir Rahman Rahmani. Air India Operates Kabul-Delhi Flight with 129 Passengers.

To avoid the power vacuum created after the escape of the president, head of High Council for National Reconciliation Abdullah Abdullah, former President Hamid Karzai, and head of Hezb-e-Islami Gulbadin Hekmatyar came together and shaped a temporary council. The council is aimed at transferring the power peacefully to the Taliban.

(The above story first appeared on LatestLY on Aug 16, 2021 01:05 PM IST. For more news and updates on politics, world, sports, entertainment and lifestyle, log on to our website latestly.com).