A diplomat from Germany was killed in blasts that rocked the Lebanese capital Beirut on August 4, German Foreign Minister Heiko Mass said on Thursday. 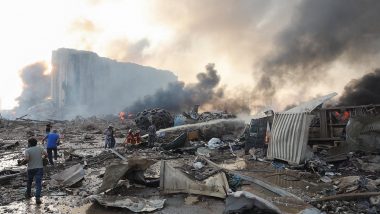 Beirut, August 6: A diplomat from Germany was killed in blasts that rocked the Lebanese capital Beirut on August 4, German Foreign Minister Heiko Mass said on Thursday. In a statement, Heiko Mass said the diplomat who was working at the German embassy in Lebanon died at her apartment. The death toll from the deadly explosions has increased to 135. Lebanon Blast Caught on Camera: Terrifying Videos and Images of Explosion at Beirut Port Shared.

"Our worst fear was confirmed. A member of our embassy in Beirut was killed in her home in the aftermath of the explosion," Mass said. "I would like to thank everyone who, like our late colleague, takes great personal risks every day in the service of our country," he added. A series of blasts rocked the Beirut port on Tuesday, leaving scores dead and around 4000 wounded, and shaking buildings all over the city. Beirut Blast: UN-Backed Special Tribunal Postpones Verdict on Killing of Ex-Lebanon PM Rafic Hariri.

Earlier today, Maas told the German tabloid Bild that he had spoken with Lebnonese Foreign Minister Charbel Wehbe to enquire, "How Germany can help quickly and without red tape." "The images of Beirut struck our hearts," Mass had said. A number of German governmental agencies are preparing to send officials to Lebanon in order to help with recovery efforts.

(The above story first appeared on LatestLY on Aug 06, 2020 04:03 PM IST. For more news and updates on politics, world, sports, entertainment and lifestyle, log on to our website latestly.com).