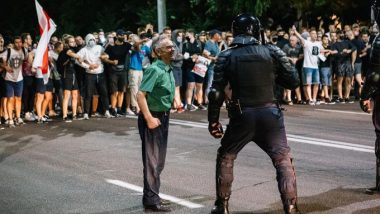 Minsk, August 10: Germany, the most influential democratic nation in the region of Europe comprising of erstwhile Soviet Union members, marked its strong apprehensions over the results of Belarus election 2020. Shortly after the country's polling body declared a landslide win for President Alexander Lukashenko, Berlin raised questions over the outcome.

A strongly-worded statement issued by the German government said it has "strong doubts" over the results projected by the Belarus polling body. It further stated that the manner in which the poll results were declared give impetus to the suspicion that the election was "not free and fair". Beat Coronavirus with Vodka, Saunas and Working on Tractors, Says Belarus President.

The statement by Germany comes amid clashes in Minsk since last night, with detractors of Lukashenko taking it to the streets to mark their angst against what they called a "manipulated" result. In the counter-action by riot control police, at least one protest was reported to be killed.

European Union Calls For Votes to be Recounted

Around 120 protesters were arrested and nearly 3,000 detained, reported Russian news agency RIA. The coalition of Opposition parties in the country addressed a press conference to announce that they have "rejected" the poll results.

As per the results declared by the Belarus polling body, Lukashenko secured a total of 80.3 percent of the votes, whereas, his main challenger Svetlana Tikhanovskaya drew only 9.9 percent of the total votes.

"We have already won, because we have overcome our fear, our apathy and our indifference," said Tikhanovskaya, a 38-year-old teacher who entered into the political fray after her husband and political activist Sergei Tikhanovsky was arrested in May.

Lukashenko, however, decried the allegations levelled against him by calling them as "externally motivated". He referred to the protesters who have hit the streets as "sheeps" controlled by foreign governments who allegedly want to interfere in the governance of Belarus.

Notably, the 65-year-old incumbent President has been ruling since 1994, shortly after the dissolution of the Soviet Union. While Lukashenko has won five elections so far, the credibility of the polls conducted in the last 26 years have been questioned by various international bodies.

(The above story first appeared on LatestLY on Aug 10, 2020 04:25 PM IST. For more news and updates on politics, world, sports, entertainment and lifestyle, log on to our website latestly.com).