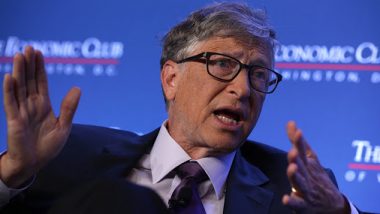 Washington, August 10: On Sunday, Microsoft founder and philanthropist Bill Gates said that it is 'mind-blowing" that the U.S. government hasn’t improved Covid-19 testing that he earlier described as slow and lacking fair access. According to a Bloomberg report, Gates said on CNN’s “Fareed Zakaria GPS". "You’re paying billions of dollars in this very inequitable way to get the most worthless test results of any country in the world. No other country has this testing insanity."

In another interview of Gates published with WIRED recently, he said that most US tests are 'completely garbage' because it takes so long to return results. He said that the results take more than a week to come, thus frustrating public, health authorities who rely on timely testing data. US Hits 5 Million COVID-19 Cases, Death Toll Crosses 162,400: John Hopkins Tally.

Over several years, Gates had warned that the US was unprepared for a massive pandemic.  Accusing the US government, Gates said, “It’s mind-blowing that you can’t get the government to improve the testing because they just want to say how great it is."

Gates mentioned that he expects the U.S. to largely get through the pandemic by the end of next year as therapeutics and a vaccine become available. On Sunday, US crossed 5 million cases.

(The above story first appeared on LatestLY on Aug 10, 2020 07:36 AM IST. For more news and updates on politics, world, sports, entertainment and lifestyle, log on to our website latestly.com).