Over 200 people have lost their lives in Canada as temperatures soar to a record high of more than 49 degree Celsius since Friday. The scorching heatwave conditions have extended to the US Pacific Northwest. 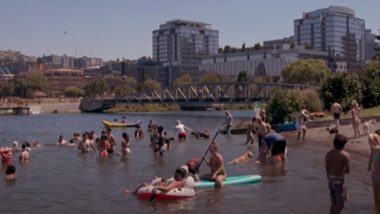 Toronto, June 30: Over 200 people have lost their lives in Canada as temperatures soar to a record high of more than 49 degree Celsius since Friday, reported AFP. The scorching heatwave conditions have extended to the US Pacific Northwest. As per data released by the Royal Canadian Mounted police, at least 134 people died in Vancouver area. Canada's Lytton in British Columbia province recorded 49.5 degree Celsius on Tuesday. The area is located almost 250 kilometres east of Vancouver. Canada, Northwest US Face Hottest Day With Intense Heat Wave.

Seattle hit 108 degrees Fahrenheit (42 Celsius) by Tuesday evening — well above Sunday's all-time high of 104 F (40 C). Portland, Oregon, reached 116. Schools and businesses were closed due to the heatwave. Experts are of the opinion that the main reason for the heatwave stretching between the US state of Oregon to Canada's Arctic territories is due to a high-pressure ridge trapping warm air in the region, reported global news agency AFP. Meanwhile, Reuters claimed that at least 233 people succumbed due to the heatwave in cabada;s British Columbia.

Authorities have issued alerts for British Columbia, Alberta, and parts of Saskatchewan and other regions. They warned that prolonged and dangerous heatwave could persist throughout the week. "We are in the midst of the hottest week British Columbians have ever experienced, and there are consequences to that, disastrous consequences for families and for communities." Reported the global news agency quoting British Columbia Premier John Horgan as saying. According to Environment and Climate Change Canada, the previous highest temperature in the country was 45 degree Celsius, which was recorded in Saskatchewan in 1937. British Columbia Town Sets New High Temperature for Canada.

Due to the heatwave, emergency cooling centres have also been opened in the cities across the western United States and Canada. Due to the extreme heat and intense drought, there is a danger of forest fires to break out over the weekend. The heatwave was caused by what meteorologists described as a dome of high pressure over the Northwest. It reportedly worsened due to climate change.

(The above story first appeared on LatestLY on Jun 30, 2021 03:58 PM IST. For more news and updates on politics, world, sports, entertainment and lifestyle, log on to our website latestly.com).