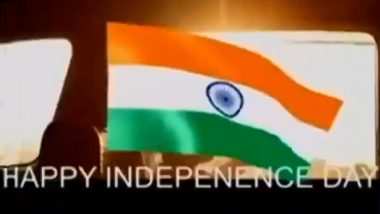 An Indian flag appeared over an ad on the channel (Photo Credits: Screengrab/Twitter)

Islamabad, August 2: Dawn, a leading Pakistani news channel, was reportedly hacked on Sunday. Several videos and photos had surfaced on social media which showed an Indian Flag over an advertisement on the Pakistani news channel. Dawn released an official statement in the matter. It ordered an inquiry in the incident.

On Sunday, while the was running on the news channel, an Indian flag suddenly appeared on the screen with a message “Happy Independence Day”. Screenshots and videos of the Indian Flag on Dawn news channel are going viral. The incident took place at around 3:30 pm. Pakistan Foreign Ministry Website Hacked Days After Pulwama Attack.

Videos of Indian Flag on Appearing on Screen of Dawn News Channel:

Lockdown Day 150 : Someone hacked @Dawn_News of Pakistan and broadcasted an Indian Flag on TV with Happy Independence Day. 🇮🇳 pic.twitter.com/rzrYluZxSh

Dawn news in a statement said that it was broadcasting as normal when suddenly the Indian flag and “Happy Independence Day” appeared on the commercial running on the screen. The Indian flag remained there for some time. The Pakistani news channel said that an investigation was initiated into the matter and will inform its viewers after reaching a conclusion.

(The above story first appeared on LatestLY on Aug 02, 2020 09:21 PM IST. For more news and updates on politics, world, sports, entertainment and lifestyle, log on to our website latestly.com).