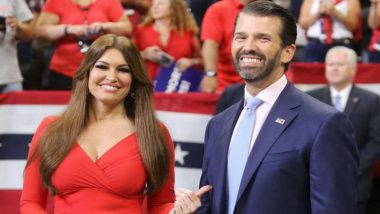 Washington, July 4: Kim Guilfoyle, the girlfriend of Donald Trump Jr. and a top Trump campaign official, has tested positive for the novel coronavirus, it was reported.

Guilfoyle, who travelled to Mount Rushmore to attend President Donald Trump's July 4 kick-off address on Fridat, was not in contact with him and did not travel on Air Force One, Politico news said in a report. Shah Mehmood Qureshi, Pakistan Foreign Minister, Tests COVID-19 Positive.

Sergio Gor, chief of staff for the Trump Victory Finance Committee, said in a statement on Friday: "After testing positive, Kimberly was immediately isolated to limit any exposure. She's doing well, and will be retested to ensure the diagnosis is correct since she's asymptomatic, but as a precaution will cancel all upcoming events.

"Donald Trump Jr was tested negative, but as a precaution is also self isolating and is cancelling all public events."

Guilfoyle however, did not have coronavirus symptoms prior to the rally, Politico news quoted a New York Times report as saying.

Guilfoyle, a former Fox News personality who now works for the Trump campaign, is the latest person close to the President to test positive for coronavirus.

In May, a member of the US military who worked in the White House tested positive for the virus.

(The above story first appeared on LatestLY on Jul 04, 2020 12:24 PM IST. For more news and updates on politics, world, sports, entertainment and lifestyle, log on to our website latestly.com).