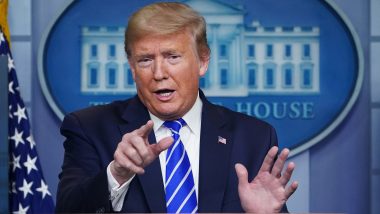 Washington DC, May 27: Amid rising tensions between India and China, United States President Donald Trump on Wednesday offered to mediate on the "raging border issues" between both the two countries. Donald Trump said that he have informed India and China that the US is ready to mediate their border dispute. India-China Stand-Off Continues in Ladakh, Top Commanders of Indian Army to Carry Out In-Depth Review of Situation in LAC.

The US president Trump tweeted, “We have informed both India and China that the United States is ready, willing and able to mediate or arbitrate their now raging border dispute. Thank you!” Trump’s offer to media between the two Asian countries came a day after reports surfaced that China has started to construct airbase around 200 km away from Pangong lake. Indian and Chinese Army Border Personnel Meet Held in Ladakh.

We have informed both India and China that the United States is ready, willing and able to mediate or arbitrate their now raging border dispute. Thank you!

Meanwhile, China on Wednesday said that the situation at the border with India is “overall stable and controllable,” and both the countries have proper mechanisms and communication channels to resolve the issues through a dialogue and consultation. Earlier in the day, India reiterated that it would not stop infrastructure development projects in strategic areas along the nearly 3,500-km Sino-India border notwithstanding China's well-coordinated efforts to stall them.

(The above story first appeared on LatestLY on May 27, 2020 05:07 PM IST. For more news and updates on politics, world, sports, entertainment and lifestyle, log on to our website latestly.com).