India-China Stand-Off Continues in Ladakh, Top Commanders of Indian Army to Carry Out In-Depth Review of Situation in LAC

India will not stop infrastructure development projects in strategic areas along the nearly 3,500-km Sino-India border notwithstanding China's well-coordinated efforts to stall them by attempting to vitiate the situation in areas like eastern Ladakh, government sources said on Tuesday. 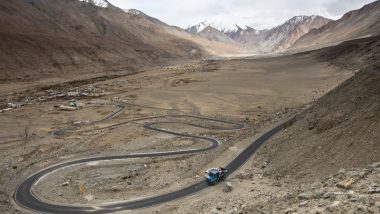 As the tense stand-off between the Chinese and Indian troops in Eastern Ladakh continues, top commanders of the Indian Army will carry out an in-depth review of the situation in several areas along the Line of Actual Control (LAC) at a three-day conference beginning Wednesday.

The main focus of the deliberations will be on the situation in eastern Ladakh where Indian and Chinese troops were locked in an eyeball-to-eyeball face-off in Pangong Tso, Galwan Valley, Demchok and Daulat Beg Oldie, the sources said. Tension Mounts in Ladakh as China Brings In More Troops Along LAC; Indian Army Maintains Aggressive Posturing.

In view of the nearly 20-day standoff between the two sides, the Indian Army has significantly ramped up its presence in sensitive border areas in North Sikkim, Uttarakhand and Arunachal Pradesh besides Ladakh to send across a message that India will not be wilting under any aggressive military posturing by China, the sources said.

Government sources said Singh has conveyed to the military brass that there was no need for reviewing the implementation of any of the key projects along the Line of Actual Control (LAC) in Ladakh, Sikkim, Uttarakhand or in Arunachal Pradesh in view of the aggressive behaviour by Chinese troops in several sensitive areas.

The Chinese side has been particularly peeved at India laying a key road in the Finger area of Pangong Tso Lake area besides another road connecting the Darbuk-Shayok-Daulat Beg Oldie road in Galwan Valley.

In the last five years, India has been focusing on improving road and other key infrastructure along the LAC as part of efforts to bolster military preparedness to deal with any challenge from the Chinese side.

The situation in eastern Ladakh deteriorated after around 250 Chinese and Indian soldiers were engaged in a violent face-off on the evening of May 5 which spilled over to the next day before the two sides agreed to "disengage" following a meeting at the level of local commanders.

Over 100 Indian and Chinese soldiers were injured in the violence.

Since then, Chinese military has increased its strength in Pangong Tso lake, Galwan Valley, Demchok and Daulat Beg Oldi, and is resorting to "aggressive patrolling" in these areas. The India Army is also carrying out similar exercise in the region, sources said.

India last week said the Chinese military was hindering normal patrolling by its troops and asserted that India has always taken a very responsible approach towards border management.

At a media briefing, External Affairs Ministry Spokesperson Anurag Srivastava also strongly refuted China's contention that the tension was triggered due to trespassing by Indian forces on the Chinese side.

India's response came two days after China accused the Indian Army of trespassing into its territory, claiming that it was an "attempt to unilaterally change the status" of the LAC in Sikkim and Ladakh.

On May 5, the Indian and Chinese army personnel clashed with iron rods, sticks, and even resorted to stone-pelting in the Pangong Tso lake area in which soldiers on both sides sustained injuries.

In a separate incident, nearly 150 Indian and Chinese military personnel were engaged in a face-off near Naku La Pass in the Sikkim sector on May 9. At least 10 soldiers from both sides sustained injuries.

The troops of India and China were engaged in a 73-day stand-off in Doklam tri-junction in 2017 which even triggered fears of a war between the two nuclear-armed neighbours.

The India-China border dispute covers the 3,488-km-long LAC. China claims Arunachal Pradesh as part of southern Tibet while India contests it. Both sides have been asserting that pending the final resolution of the boundary issue, it is necessary to maintain peace and tranquility in the border areas.

In the summit, the two leaders decided to issue "strategic guidance" to their militaries to strengthen communications so that they can build trust and understanding.

Modi and Xi held their second informal summit in Mamallapuram near Chennai in October last year with a focus on further broadening bilateral ties.