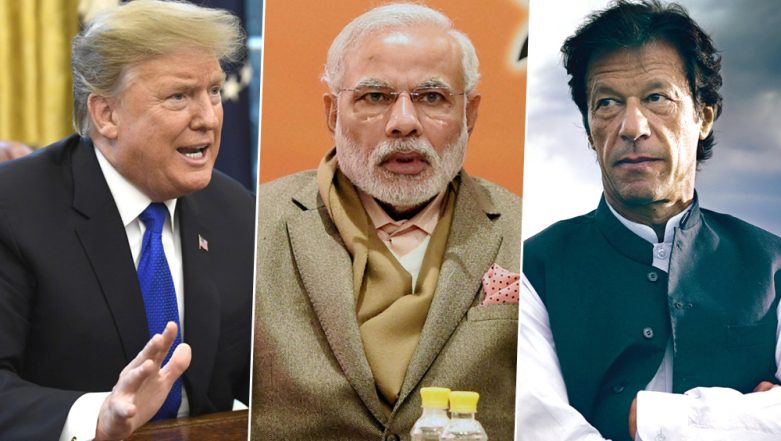 New Delhi/Washington, July 23: After US President Donald Trump offered to mediate in the Kashmir issue, the US State Department on Tuesday clarified it was a "bilateral" issue between India and Pakistan. The US State Department further stated that the US "welcomes" the two countries "sitting down" for talks, adding the country is "ready to assist" in the process. India has consistently rejected any foreign intervention in the dispute.

"While Kashmir is a bilateral issue for both parties to discuss, the Trump administration welcomes Pakistan and India sitting down and the United States stands ready to assist," a State Department spokesperson told PTI. Alice Wells, Acting Assistant Secretary of the Bureau of South and Central Asian Affairs, also acknowledged that Kashmir is a bilateral issue between India and Pakistan -- echoing New Delhi's consistent stand on the subject. Donald Trump Meets Imran Khan, Offers to Mediate Kashmir Issue Between India And Pakistan.

The US State Department also said Pakistan taking "sustained and irreversible" steps against terrorism is key to a successful dialogue with India. “We believe the foundation for any successful dialogue between India and Pakistan is based on Pakistan taking sustained and irreversible steps against militants and terrorists on its territory. These actions are in line with Prime Minister (Imran) Khan’s stated commitments, and Pakistan’s international obligations,” the State Department spokesperson said.

During a press conference with Pakistan Prime Minister Imran Khan, President Trump said that Prime Minister Narendra Modi had asked him to mediate in the Kashmir issue, a claim immediately rejected by India. "I was with Prime Minister Modi two weeks ago and we talked about this subject (Kashmir). And he actually said, ‘would you like to be a mediator or arbitrator?’ I said, ‘where?’ (Modi said) ‘Kashmir’,” Trump said.

"No such request has been made by Prime Minister Narendra Modi to the US President," Raveesh Kumar, spokesperson of India's Ministry of External Affairs tweeted. "It has been India's consistent position that all outstanding issues with Pakistan are discussed only bilaterally. Any engagement with Pakistan would require an end to cross-border terrorism. The Simla Agreement and the Lahore Declaration provide the basis to resolve all issues between India and Pakistan bilaterally," he added.