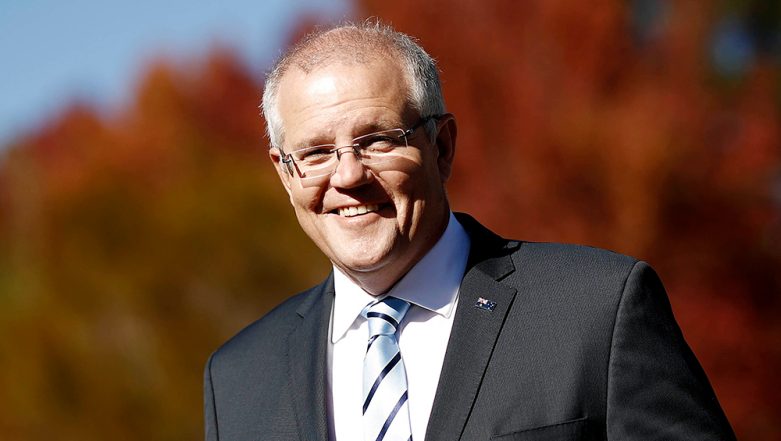 Canberra, May 7: Ahead of the General Elections in Australia, which are due this month, an egg was thrown at Australian Prime Minister Scott Morrison on Tuesday by a protester while he was campaigning in Albury, a city in southern New South Wales. According to reports, the egg grazed Morrison's head but did not break. The Prime Minister termed the egg thrower as "cowardly". As per the video footage on local TV channel, a 25-year-old woman was restrained at the scene and later was arrested by the Police, reports informed. Scott Morrison Becomes The New Prime Minister of Australia, Replaces Malcolm Turnbull.

The attack comes at a time when farmers in Australia have been facing protests by vegan activists. It must be noted that Morrison is not the first Australian politician to be targeted by a protester this year. In March, the far-right Senator Fraser Anning was egged after making heavily criticised comments about the mosque shootings in Christchurch in New Zealand. According to reports, a 17-year-old boy was later cautioned by police over the egg incident. Scott Morrison Speaks to Chinese Woman in Korean, Gets Criticised on Social Media (Watch Video).

Morrison took to Twitter and said, "My concern about today's incident in Albury was for the older lady who was knocked off her feet. I helped her up and gave her a hug. Our farmers have to put up with these same idiots who are invading their farms and their homes".

We will stand up to thuggery whether it’s these cowardly activists who have no respect for anyone, or militant unionists standing over small businesses and their employees on work sites.

The general elections in 2019 will be held on May 18 to elect members of the 46th Parliament of Australia. The election was called following the dissolution of the 45th Parliament as elected at the 2016 double dissolution federal election. All 151 seats in the House of Representatives (lower house) and 40 of the 76 seats in the Senate (upper house) will be up for election.