The people behind this activity posted in Spanish and English about news and current events in the US including memes and other content about humor, race relations and racial injustice, feminism and gender relations, environmental issues and religion. 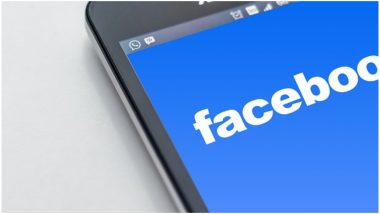 San Francisco, October 28: As the US and Myanmar prepare for November elections, Facebook has removed two malicious networks that targeted the US and one network originated in and targeted domestic audiences in Myanmar for violating its policies. The social network removed two Facebook Pages and 22 Instagram accounts for violating its policy against foreign interference in the US.

"This network began creating accounts in April 2020. The individuals behind this activity took steps to conceal their coordination and who is behind this network," Nathaniel Gleicher, Head of Security Policy at Facebook, said late on Tuesday. Facebook CEO Mark Zuckerberg, Alphabet and Google CEO Sundar Pichai and Twitter CEO Jack Dorsey Set to Be Grilled by US Panel.

The people behind this activity posted in Spanish and English about news and current events in the US including memes and other content about humor, race relations and racial injustice, feminism and gender relations, environmental issues and religion.

"A small portion of this content included memes posted by the Russian Internet Research Agency (IRA) in the past. They reused content shared across internet services by others, including screenshots of social media posts by public figures," Gleicher informed.

"This network posted primarily in Burmese about current events in Rakhine state in Myanmar, including posts in support of the Arakan Army and criticism of Tatmadaw, Myanmar's Armed forces," Facebook said. "We found this network as part of our proactive investigation into suspected coordinated inauthentic behaviour ahead of the upcoming election in the region".

The company also removed 12 Facebook accounts, 6 Pages and 11 Instagram accounts for government interference and this network originated in Iran and focused primarily on the US and Israel. Some of these accounts tried to contact others, including an Afghanistan-focused media outlet, to spread their information.

They focused on Saudi Arabia's activities in the Middle East and claims about an alleged massacre at Eurovision, an international song contest, hosted by Israel in 2019, Facebook said. Over the past three years, Facebook has detected and removed over 100 networks of coordinated inauthentic behaviour from its platforms.

(The above story first appeared on LatestLY on Oct 28, 2020 11:41 AM IST. For more news and updates on politics, world, sports, entertainment and lifestyle, log on to our website latestly.com).