The confirmed death toll in the partial collapse of a 12-storey residential building in Surfside, Florida, has increased to 36, Miami-Dade Mayor Daniella Levine Cava said. 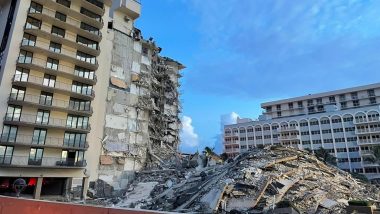 Miami-Dade County Fire Chief Alan Cominsky said they failed to find any positive signs in regard to voids or livable spaces as rescue workers continue to search the rubble.

Search and rescue operations were halted for about two hours on Tuesday afternoon because of lightning and some gusts of wind that went above 48 km per hour with tropical storm Elsa approaching, according to a CNN report.

The collapse occurred on June 24 at the Champlain Towers South condominium in the beachside town that sits around 9.6 km north of Miami Beach.

Since the collapse, multiple Miami-area buildings have been evacuated, local media reported.

(The above story first appeared on LatestLY on Jul 07, 2021 10:18 AM IST. For more news and updates on politics, world, sports, entertainment and lifestyle, log on to our website latestly.com).