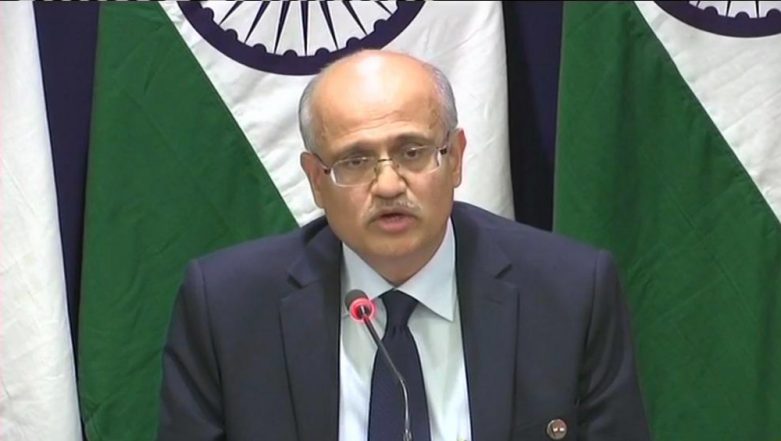 Beijing, April 22: India on Monday told China to be sensitive to its concerns as Foreign Secretary Vijay Gokhale met Chinese State Councillor Wang Yi here, with whom he is likely to raise the issue of blacklisting Pakistan-based terrorist Masood Azhar. Gokhale is on two-day China visit to meet Wang, also China's Foreign Minister, and is expected to convince Beijing not to block a resolution to declare Azhar an international terrorist at a UN panel. Azhar, a dreaded terrorist, is wanted for plotting deadly attacks in India. His terror outfit Jaish-e-Mohammed claimed responsibility for carrying out a suicide bombing in Jammu and Kashmir's Pulwama on February 14 that killed 40 Central Reserve Police Force troopers.

China has repeatedly blocked all such resolutions by India, the US, Britain and France by placing a "technical hold" on them at the UN 1267 sanctions committee. Last month, Beijing's placed its latest "technical hold" on the US-sponsored resolution against Azhar, a move that India called "disappointing". "We will work together with the Chinese side to deepen mutual understanding, strengthen mutual trust to implements the decisions that are taken by the leaders and do it in a manner where we are sensitive to each other's concerns," Gokhale said while meeting Wang and Vice Foreign Minister Kong Xuanyou. Foreign Secretary Vijay Gokhale to Visit China for Talks With Chinese Foreign Minister Wang Yi.

Gokhale, who was also India's former Ambassador to China, said both sides were working to implement what was agreed between Indian Prime Minister Narendra Modi and Chinese President Xi Jinping at the Wuhan summit last year. "It's been a year since our leaders met in Wuhan and my colleagues, Vice (Foreign) Minister Kong Xuanyou and I have been following up on efforts to see that to implement the understandings that were reached at the meeting.

"Last year, we had very brisk political exchanges including your visit to Delhi for the first high-level meeting between for people to people exchange was an important development. And my Minister (Foreign) looks forward to coming for the second meeting in China later this year," he added. Wang stressed the need for India and China to step up strategic communication and cooperation.

"China and India are two major countries and neighbours. They are also two emerging market countries and are each other's emerging partners. "In this sense, it's very important for the two countries to work together to increase strategic communications even the geopolitical trust and strategic cooperation on international and regional issues." Beijing's latest move to shield Azhar has tested Sino-Indian ties that had been on an upswing after Modi and Xi's ice-breaking meeting last year.

Gokhale's visit comes at a time when Beijing is facing mounting international pressure to declare Azhar an international terrorist. It is to be seen if India's opposition to the Belt and Road forum will figure in the talks. India is likely to skip for the second straight year China's Belt and Road forum, a mega event that Beijing claims will be attended by the heads of 37 countries and over 100 international organisations.

The Belt and Road is a trillion-dollar project that aims to connect Asia, Africa and Europe through a network of highways, sea lanes and ports. India opposes its key artery, the China-Pakistan Economic Corridor (CPEC), as it cuts through the disputed part of Kashmir held by Islamabad. In 2017, India had boycotted the launch of the forum over the same issue.

In a press conference on April 20, Wang appealed to India again to shed its inhibition on the CPEC, saying the project has nothing to do with the Kashmir issue. He said India joining the Belt and Road project will be a good choice for it.