Giglio, an Italian Island in Tuscan Archipelago Reports No COVID-19 Cases, Answer to Why Virus Spared the Islanders Not Known 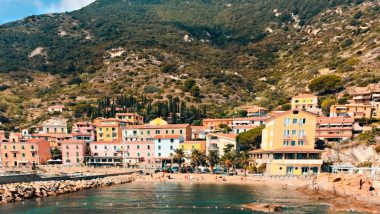 As the world continues to loom under the fear of coronavirus that has spread across countries, nobody living in Isola del Giglio, an Italian island was affected. Paola Multi, a researcher who was stranded on the tiny island due to travel restrictions found out the details. As more three of the islanders tested positive for the virus, Paola was ready for a steady rise the cases. However, as days passed the 800 people living in closely-knit quarters did not contract the virus. The Gigliesi live in densely packed homes built on an old fortress. Giglio situated in the Tyrrhenian Sea, off the coast of Tuscany is a part of the Province of Grosseto. The island is one of seven that form the Tuscan Archipelago, lying within the Arcipelago Toscano National Park. Want to Work From Home by The Beach? Bermuda Islands is Offering Year-Long Stays For Remote Workers, Know How to Apply.

Dr Armando Schiaffino, the only physician for around 40 years on the island was worried about there would be an outbreak. Associated Press quoted the doctor as saying, "Every time an ordinary childhood illness, like scarlet fever, measles or chickenpox strikes, within a very few days practically all get infected on Giglio." Global COVID-19 Cases Top 15.6 Million, Death Toll Rises to 638,243, Says Johns Hopkins.

Muti, a breast cancer researcher at the University of Milan decided to find out why the islanders were safe this time. But due to travel restrictions, she was also stranded at one place. Muti stated, as per her research Giglio's first known COVID-19 case was reported on February 18. It was a 60-year-old who had attended a relative's funeral, he returned to the mainland the same day and died in a hospital three weeks later. Three more visitors who came from the mainland tested positive on the island. One of them was a German from northern Italy, the other came from Australia. They both decided to self-isolate but very surprising despite socialising they had not given the virus to any of the islanders. World Tourism Set to Lose $1.2 Trillion Due to Coronavirus Pandemic: UNCTAD.

Soon after, the health office sent kits to test for antibodies if any of the people were affected. Out of the 800 islanders, 723 volunteered to be tested. The Reverend Lorenzo Pasquotti, the priest who conducted the service and was tested positive said, "After the funeral, there were greetings, hugging and kissing." Hugs and kisses are part of the customs during the procession to the cemetery. Of the islanders who were tested, only one of them was found to have antibodies, it was an elderly man who had sailed on the same ferry as the German visitor. Muti still does not have a credible answer to why the virus spared the islanders. Massimo Andreoni, head of infectious diseases at Rome's Tor Vergata hospital also said that the reason is not known.

Daniel Altmann, a professor of immunology at Imperial College London. as saying, "It could be something more or less trivial nobody got infected because through good luck there was little contact." Muti is planning to do a genetic study someday to understand the reason.

(The above story first appeared on LatestLY on Jul 26, 2020 07:43 PM IST. For more news and updates on politics, world, sports, entertainment and lifestyle, log on to our website latestly.com).