Famous American ski mountaineer Hilaree Nelson is reportedly missing after she was skiing down Manaslu in Nepal. 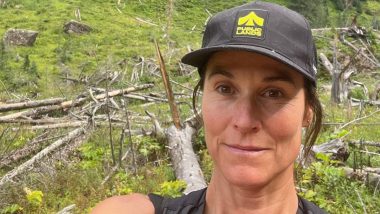 Delhi, September 27: Famous American ski mountaineer Hilaree Nelson is reportedly missing after she was skiing down Manaslu in Nepal. Reports said that Nelson was on the eighth highest peak in the world with her partner Jim Morrison when she went missing just below the summit.

Sharing an update on Hilaree Nelson, a beloved member of The North Face family. pic.twitter.com/qv0bOL0LsB

Jiban Ghimire of the Kathmandu based Shangri-La Nepal Trek that organised and outfitted the expedition said that the 49-year-old Hilaree Nelson was skiing down from the 8,163-meter (26,775-foot) summit with her partner Jim Morrison when she fell off the mountain. Ladakh: Indian Air Force Deploys Cheetal Helicopter To Rescue Stranded Italian Mountaineer in Kargil

Amid constant rain and snow, the rescue operation is posing a major challenge. Since visibility improved on Tuesday, a helicopter was hovering over the mountain to see any signs of the missing climber.

Jim Morrison, Nelson’s partner, is safe and has been accompanying the search and rescue team. Nelson, in 2012, became the first woman to summit the highest mountain in the world, Everest, and its adjacent Lhotse within 24 hours. In 2018, she summited Mount Lhotse, the world's fourth-highest peak.

All of the climbers caught in the avalanche Monday were accounted for. Some of the injured were flown to Kathmandu and are being treated at hospitals for their injuries.

(The above story first appeared on LatestLY on Sep 27, 2022 12:53 PM IST. For more news and updates on politics, world, sports, entertainment and lifestyle, log on to our website latestly.com).