The Islamic Hamas movement, which controls the Gaza Strip, has said that it will not accept any ceasefire with Israel until the Jewish state "completely stops violations against Al-Aqsa Mosque and the neighbourhood of Sheikh Jarrah in Jerusalem" 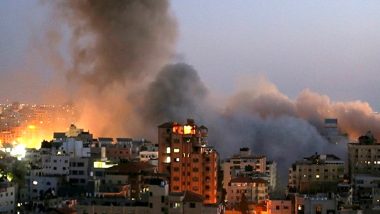 Gaza, May 13: The Islamic Hamas movement, which controls the Gaza Strip, has said that it will not accept any ceasefire with Israel until the Jewish state "completely stops violations against Al-Aqsa Mosque and the neighbourhood of Sheikh Jarrah in Jerusalem".

In an interview with the local media on Wednesday, Hamas spokesman in Gaza Fawzi Barhoum also denied reports that a high-ranking Egyptian security delegation was expected to arrive in Gaza as part of the efforts to reach a ceasefire between Israel and the militant groups in the coastal enclave, reports Xinhua news agency. Israel-Palestine Conflict: At Least 65 Killed in Gaza, 7 in Israel As Hamas Launches New Barrage of Airstrikes

Earlier in the day, a Palestinian source close to Hamas told the Lebanese Al-Akhbar newspaper that Egypt, Qatar and the UN are making contacts to reach a cease-fire in the Gaza Strip.

The source said the last contact with the three mediators was on Tuesday afternoon when they proposed a comprehensive ceasefire that begins at midnight.

"Our answer was clear that there would be no ceasefire before stopping the Israeli assaults in Jerusalem and stopping the airstrikes on the Gaza Strip," the source added. Israel Airstrikes Blow 14-Floor High-Rise Building in Gaza Strip; Israeli PM Benjamin Netanyahu Says ‘Will Inflict Blows That They Never Dreamt Of’

The tension in the Gaza Strip has been flaring up since Monday afternoon, with more rockets being fired from the enclave into Israel.

In response, Israeli fighter jets have also intensified bombing on militants' posts and facilities in Gaza.

Ashraf al-Qedra, spokesman of the Hamas-run Health Ministry, said in a statement that 56 Palestinians were killed, including 14 children, five women and one elderly man, and 335 were wounded as a result of the ongoing Israeli airstrikes.

Al-Qassam Brigades, the armed wing of Hamas, said that Bassem Issa, commander of the militant group in Gaza city, was killed in an Israeli air attack.

According to the statement, Issa, along with three other militants, was killed while preparing for launching more rockets from Gaza into Israel.

(The above story first appeared on LatestLY on May 13, 2021 12:20 PM IST. For more news and updates on politics, world, sports, entertainment and lifestyle, log on to our website latestly.com).