At least 32 people were killed and several injured mostly in a suicide bombing in Balochistan on Wednesday as millions of voters queued up across Pakistan to elect a new government. 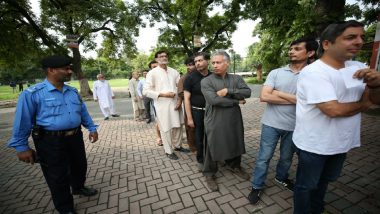 Islamabad, July 25: At least 32 people were killed and several injured mostly in a suicide bombing in Balochistan on Wednesday as millions of voters queued up across Pakistan to elect a new government.

Civil Hospital Quetta officials confirmed the casualties. The area was crowded as people were making their way to vote at Tameer-e-Nau Model School. Polling was halted at the polling station.

While polling stations officially opened for voting at 8 a.m., enthusiastic citizens queued up outside their respective stations as early as 7 a.m. Voting will officially end at 6 p.m. while as counting of the votes was being done simultaneously.

Results for the 11th general elections are expected to trickle in immediately after the polling ends with the final outcome likely by Thursday morning or afternoon, according to election officials.

A Pakistan Tehreek-e-Insaf (PTI) worker was killed and two others injured as party activists clashed with Awami National Party (ANP) workers outside a polling station in Nawan Kali in Khyber-Pakhtunkhwa, according to Express-News.

The workers of the two parties clashed in Mardan as well. Several people have been injured in the firing incident. Following the clash, police took control of the affected area. Two people were also injured in a firing incident in Dera Murad Jamali in Balochistan.

In a separate incident, four people were injured in a blast outside a political camp in Larkana, in Sindh province, the home of the Bhutto family. Independent candidate Jibran Nasir said that Tehreek-i-Labbaik Pakistan supporters attacked a facilitation camp he had set up in Chandio Village in Karachi.

As many as 12,570 candidates are contesting for a total of 849 seats of national and provincial assemblies in the general election. Nearly 106 million people are eligible to vote.

In an effort to increase voter participation, the Election Commission has declared a public holiday on Wednesday.

Over four lakh security personnel have been deployed at polling stations across the country to maintain law and order and take action against harassment, after the nation witnessed one of the bloodiest campaignings, including the July 13 bombing that killed 150 people.

According to a poll official, 5,878 polling stations have been declared "highly sensitive" -- official euphemism to mean they are prone to violence -- in Sindh; 5,487 in Punjab and Islamabad; 3,874 in Khyber-Pakhtunkhwa and FATA and 1,768 in Balochistan.

The elections are being held as emotions run over a graft case that led to the imprisonment of ousted Prime Minister Nawaz Sharif and his daughter Maryam Nawaz.

Sharif's PML-N has condemned the legal cases facing its members and reported pressures to leave the party along with harassment to prevent it from returning to power after its absolute majority in 2013.

These elections are the second in Pakistan's history in which a government was able to complete its term to make way for another government after being ruled by military dictators for half of the 71 years of its existence since its founding in 1947.

(The above story first appeared on LatestLY on Jul 25, 2018 02:15 PM IST. For more news and updates on politics, world, sports, entertainment and lifestyle, log on to our website latestly.com).