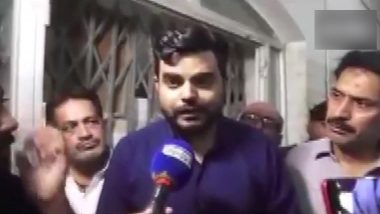 Sindh, September 17: In a shocking incident, a Hindu medical student from Sindh region in Pakistan was found murdered in her hostel room on Tuesday. Reports inform that the victim, identified as Namrita Chandani was a first-year medical student who belonged to Ghotki town. She was found lying on a charpoy with a piece of cloth tied to her neck in her hostel room, which was locked from inside. According to a tweet by ANI, Namrita's brother, Dr Vishal Sundar, who is a medical consultant, said that the preliminary checkup showed that she was murdered. “There are marks on other parts of her body too, like a person was holding her. We are a minority, please stand up for us”, Sundar said. Imran Khan's Pic With 'Mitthu Mian' Goes Viral Amid Attack on Hindu Temple Over Ghotki Blasphemy Case.

Several cases of forced conversion have come into light, highlighting religious persecution in Pakistan. While the family alleged that the student was murdered, the police and authorities have tried to downplay the incident by saying that she committed suicide. "It was not a suicide, suicide marks are different, I found cable marks around her neck. There are marks on her hand too. The marks are of cable but her friend had said that she found her with dupatta around her neck," the victim’s brother said.

Pakistan: Body of a girl, Namrita Chandani found with a rope tied to her neck in Ghotki, Sindh. Dr Vishal Sundar, her brother says, "There are marks on other parts of her body too, like a person was holding her. We are a minority, please stand up for us." pic.twitter.com/1EJYKD5MAy

The mystery around the murder has raised suspicions with people questioning whether it was a case of forced conversion. As soon as the incident was reported, an investigation into the matter has been initiated. When the victim’s brother was asked if she was facing some problems, he said, there was nothing like that as he himself had spoken to her two days before the incident took place. He demanded that the case must be investigated fairly and citizens should support his family.

A US-based Sindhi Foundation, in its report said that every year, around 1,000 young Sindhi Hindu girls between the age of 12 and 28 are abducted, forcibly married and converted to Islam. According to Pakistan's own human rights commission, there were 7,430 cases of such abductions of Sindhi girls in Pakistan from January 2004 to May 2018. The actual number is estimated to be much higher as most of the cases go unreported.

(The above story first appeared on LatestLY on Sep 17, 2019 01:19 PM IST. For more news and updates on politics, world, sports, entertainment and lifestyle, log on to our website latestly.com).