Nerves are on edge as Islamabad braces for a political showdown on Sunday as the ruling PTI is going all-out to make its public meeting successful amid mounting pressure from opposition parties. 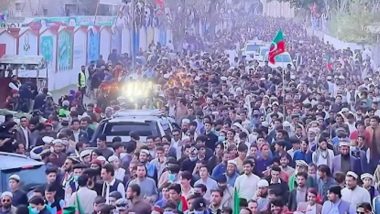 Islamabad, March 27: Nerves are on edge as Islamabad braces for a political showdown on Sunday as the ruling PTI is going all-out to make its public meeting successful amid mounting pressure from opposition parties, which are also marching on Islamabad before the vote on a no-confidence motion against Prime Minister Imran Khan, Dawn reported.

Workers and leaders of the JUI-F, under the banner of the opposition alliance PDM, have already come to take the stage on the Srinagar Highway while PML-N leader Maryam Nawaz, along with Punjab opposition leader Hamza Shehbaz was leading her party caravan via GT Road to the capital, calling it the last nail in the coffin of the PTI government. Pakistan Political Crisis: Ahead of No Trust Vote, Imran Khan's PTI Leadership 'Dented'.

Interior Minister Sheikh Rashid, speaking at a presser in Islamabad, warned the JUI-F that it would not be permitted to hold a sit-in in Islamabad, as they had been allowed to hold the public meeting on Saturday only and they would need to submit another request if they wanted to hold rally on Sunday, too, the report said. Pakistan Political Crisis: 50 Ministers Go Missing From Political Activity As PM Imran Khan Fights for Survival.

He also cautioned that no party would be allowed to enter Red Zone and action would be taken against those who attempted to take law into their hands by blocking another party's route or by holding a sit-in in violation of Supreme Court directions. He said the interior ministry would cooperate with opposition parties in connection with their upcoming rallies and no-confidence vote and provide full security to "all their lawmakers".

(The above story first appeared on LatestLY on Mar 27, 2022 01:38 PM IST. For more news and updates on politics, world, sports, entertainment and lifestyle, log on to our website latestly.com).