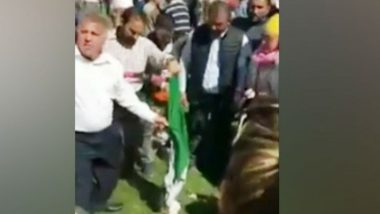 London, April 19: Pakistan-backed PoK and Khalistani elements burnt the Indian flag in Central London yesterday while the London Metropolitan Police quietly watched the flag burning taking place right before its eyes. The incident took place at Parliament Square as Prime Minister Narendra Modi was addressing the Indian community at Westminster on Wednesday. Indian activists are outraged over the London Metropolitan Police turning a blind eye to the Indian flag being pulled down from a pole and replaced by a flag representing PoK and Khalistan. The Indian tricolour was allegedly pulled down and ripped apart by a a pro-Khalistani activist.

Video evidence shows another person identified as Sahab Kashmiri from PoK, who now lives in London, raising the PoK and Khalistani flag at the pole from where the Indian tricolour was pulled down. Indian activists reminded the Metropolitan Police of former U.S. Secretary of State Hillary Clinton's famous words that Pakistan is harbouring snakes in its backyard- a grave warning to UK authorities that unless they do something about militants running across the UK, they would end up paying a heavy price for "harbouring snakes in their backyard." Activists are shocked that the U K authorities would let the flag of a nation be desecrated as tens of police persons watched. The video of the Indian flag getting burnt has made Indians furious and rightly so:

They said that unless the UK wakes up now and sees the reality of these " militant " elements it will soon became a " safe haven " for militants who will do to the U K what they have done to Pakistan. Indian Prime Minister Narendra Modi is among the 53 heads of Commonwealth nations attending the ongoing Commonwealth Heads of Government Meeting in London.

Addressing the Indian community at a 'Bharat ki Baat, Sabke Saath' event at Westminster, Prime Minister Modi described Pakistan as a "terror export factory". He said, "We believe in peace, but we will not tolerate those who like to export terror. We will give strong answers and in the language they understand. Terrorism will never be accepted." "When someone has put a terror export factory in place, attacks my people, has no power to fight a war, so attempts to attack from behind our backs... in such a case Modi knows how give a reply in the same language," said the Prime Minister, to which, the audience raised slogans of 'Bharat Mata ki Jai'.