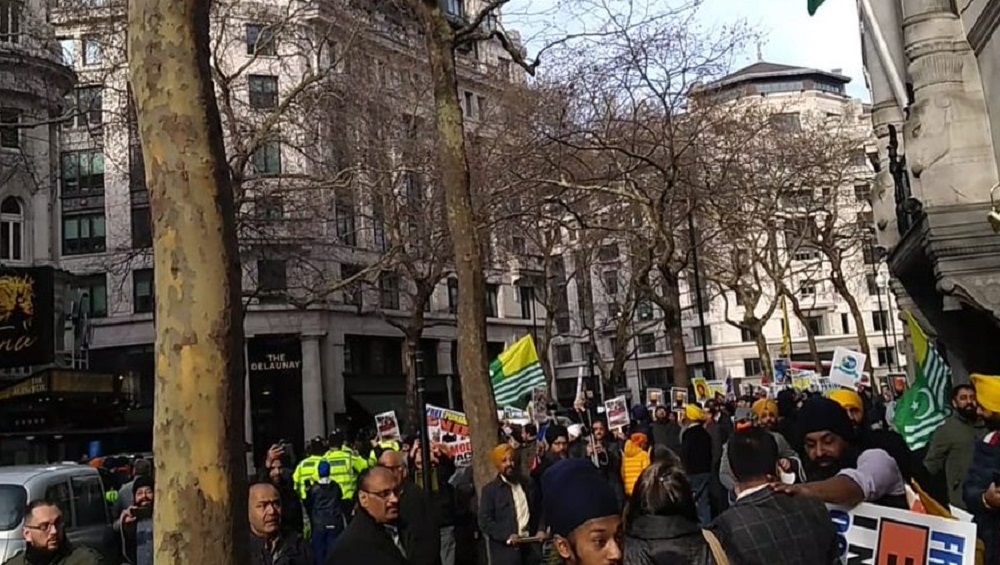 London, January 26: Protesters from UK-based separatist and pro-Pakistani outfits assembled near the Indian High Commission in London on Sunday to observe a so-called “Black Day” on India's Republic Day. The protesters were kept away from getting too close to the High Commission building by a strong police presence, including mounted officers on patrol.

Hundreds waved flags and placards calling for "Khalistan 2020 Referendum" and “Free Kashmir” as they chanted slogans against the Indian government and the Indian Army. The organisers, including Tehreek-e-Kashmir UK and Kashmir Solidarity Movement joined by some Sikh separatist outfits, gathered behind barricades set up opposite India House in Aldwych. Anti-CAA Resolution Drafted by Over 150 European Union Lawmakers, Predict Indian Law May 'Create Largest Statelessness Crisis in The World'.

As a result of safety concerns raised by Indian High Commissioner Ruchi Ghanashyam with UK Home Secretary Priti Patel and London Mayor Sadiq Khan's pledge to provide a “robust” policing plan, a large number of Metropolitan Police officers were on the scene to secure a parameter away from India House and prevent any violence.

“A proportionate policing plan is in place,” Metropolitan Police said in a statement. A similar so-called “Free Kashmir” march was banned from assembly outside the High Commission building on Diwali last October following an intervention from the UK Home Office, in the wake of violent clashes during protests to coincide with Indian Independence Day on August 15 last year.

Diaspora groups had been lobbying with the Met Police and London Mayor Sadiq Khan to avert a repeat of similar violent scenes. “I understand why many British Indians are so deeply concerned about a repeat of those awful scenes. Many have felt deeply threatened and worried, and I would like to assure all Londoners that anyone who acts unlawfully on Sunday will be held fully accountable by the police,” said Sadiq Khan.

“The right to protest is an important and valued part of our democracy, but it must always be done peacefully and within the boundaries of the law,” he said.

Later on Sunday evening, the Indian Workers' Association Great Britain (IWA-GB), an 80-year-old diaspora group, has called a “Defend the Constitution” Republic Day meeting at Southall in west London to hold a discussion on the implications of CAA and the National Register of Citizens (NRC).