The Russian Ministry of Defence also announced the destruction of six traction electrical substations in Ukraine. 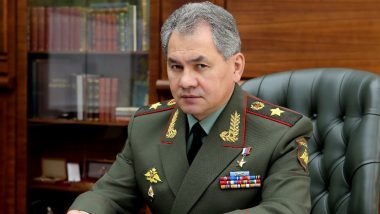 Moscow, May 4: Russian Defence Minister Sergei Shoigu has said that NATO vehicles arriving in Ukraine with weapons and ammunition for Ukrainian troops would be destroyed, RT reported.

Shoigu stressed that the US and its NATO allies continue to pump weapons into Ukraine.

"Any transport of the North Atlantic Alliance that arrived on the territory of the country with weapons or materiel for the needs of the Ukrainian armed forces is considered by us as a legitimate target for destruction," he said. Pentagon, US Companies Involved in Ukraine Military Biolabs, Says Russia.

The Russian Ministry of Defence also announced the destruction of six traction electrical substations in Ukraine.

It is noted that through these facilities the Ukrainian troops were supplied with weapons manufactured in the US and European countries.

The West can help stop "war crimes" allegedly carried out by Ukrainian forces if it uses its influence over Kiev and ceases the supply of weapons to the country, Russian President Vladimir Putin told his French counterpart Emmanuel Macron on Tuesday, according to the Kremlin, RT reported.

During their phone conversation, which reportedly lasted for more than two hours, Putin congratulated Macron on his recent re-election and updated him on developments in Ukraine, including the evacuation of civilians from the Azovstal plant in Mariupol, according to a readout of the call.

Putin claimed that the EU nations have ignored "the war crimes of the Ukrainian security forces, massive shelling of cities and towns of Donbass, resulting in civilian casualties."

(The above story first appeared on LatestLY on May 04, 2022 05:06 PM IST. For more news and updates on politics, world, sports, entertainment and lifestyle, log on to our website latestly.com).