"We consider the position of the West, which supplies lethal weapons to Ukraine, to be irresponsible," Shoigu said. 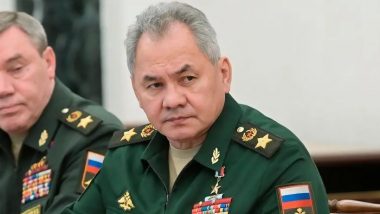 Moscow, March 29: Russian Defence Minister Sergei Shoigu said that the special military operation in Ukraine will continue until the set goals are achieved.

"The Russian armed forces will continue the special military operation until the set goals are achieved," Shoigu said at a conference call, RT reported.

"We consider the position of the West, which supplies lethal weapons to Ukraine, to be irresponsible," Shoigu said.

He noted that the uncontrolled distribution of weapons to the population and mercenaries "only aggravates the situation and in the future may pose a threat to the Europeans themselves."

Russian Defence Minister announced the fulfilment of the main tasks of the first stage of the special operation in Ukraine.

"In general, the main tasks of the first stage of the operation have been completed. The combat potential of the Ukrainian armed forces has been significantly reduced, which makes it possible to focus the main attention and main efforts on achieving the main goal - the liberation of Donbass," he said.

"Air supremacy has been won. The air force and the air defence system were practically destroyed... The country's naval forces ceased to exist. Significant losses were suffered by all formations of the ground and airborne assault forces," the Minister of Defence stated.

(The above story first appeared on LatestLY on Mar 29, 2022 04:48 PM IST. For more news and updates on politics, world, sports, entertainment and lifestyle, log on to our website latestly.com).