On the evening of April 11, it was reported that Russian soldiers dropped a poisonous substance of unknown origin on Mariupol. 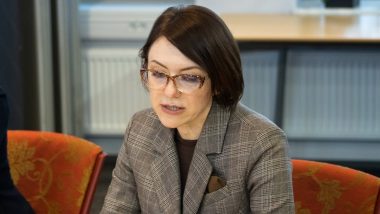 Kiev, April 12: Ukrainian military officials are currently confirming information regarding the use of chemical weapons by Russian forces in Mariupol.

Hanna Maliar, Ukraine's Deputy Minister of Defence, said on the national joint news broadcast, "We are currently confirming this information, trying to understand what it was. According to preliminary information, we can say that it is possible -- that it was, rather, phosphorous munition. Official information will be finalised later."

On the evening of April 11, it was reported that Russian soldiers dropped a poisonous substance of unknown origin on Mariupol.

According to Andrii Biletsky, leader of the Azov regiment, the army of the Russian Federation deployed chemical weapons on the Azovstal plant, which is held by Azov fighters, the report said.

The victims of the poisonous substance of unknown origin spread by Russian forces in Mariupol are in a relatively satisfactory condition, Azov Regiment has claimed.

Civilian contact with the substance was minimal, as the epicentre was at a certain distance from civilian areas. Servicemen were somewhat closer.

In a video released by the Azov Regiment, the victims describe seeing something resembling smoke or fog.

The main symptoms of the victims are facial flushing, high blood pressure, dryness and a burning sensation in the nasopharynx and mucous membranes of the eyes, tachycardia, tinnitus, shortness of breath, and dizziness, Ukrayinska Pravda reported.

(The above story first appeared on LatestLY on Apr 12, 2022 08:19 PM IST. For more news and updates on politics, world, sports, entertainment and lifestyle, log on to our website latestly.com).