The US on Sunday announced new sanctions on Russia, targeting management consultancies and accounting services and media outlets funded directly or indirectly by the state. Also, among the new curbs, were export controls on equipment and machinery such as bulldozers 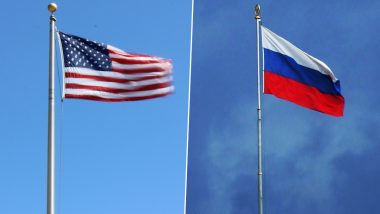 Washington, May 8: The US on Sunday announced new sanctions on Russia, targeting management consultancies and accounting services and media outlets funded directly or indirectly by the state. Also, among the new curbs, were export controls on equipment and machinery such as bulldozers.

The announcement followed an agreement between G-7 countries to further "ratchet up" costs on Russia by collectively taking further measures. A White House fact-sheet stated that sanctions in place "are already exacting an immense toll on Russia's economy and our export controls have strangled Russia's access to critical technology and the supply chains it needs to sustain its military ambitions". Russia-Ukraine War: US Gave Intel That Helped Ukraine Sink Iconic Russian Warship 'Moskva', Says Report

The US and G7 partners also committed themselves "to phasing out or banning the import of Russian oil". This group of countries includes some of the largest importers of Russian oil such as Germany and Japan. Russia-Ukraine War: ‘Don’t Blame Us for the Global Food Security Crisis’, Says Russian Foreign Ministry

"This will hit hard at the main artery of (Russian President Vladimir) Putin's economy and deny him the revenue he needs to fund his war," the White House said in the fact-sheet, adding: "The G7 also committed to work together to ensure stable global energy supplies, while accelerating our efforts to reduce dependence on fossil fuels."

The new curbs announced by the US target three of Russia's most widely watched TV channels that are also directly or indirectly controlled by the government - Joint Stock Company Channel One Russia, Television Station Russia-1, and Joint Stock Company NTV Broadcasting Company. "All three stations have been among the largest recipients of foreign revenue, which feeds back to the Russian state's revenue," the fact-sheet said.

The US has also banned American citizens and companies from providing management consultancy and accounting services to Russia. "These services are key to Russian companies and elites building wealth, thereby generating revenue for Putin's war machine, and to trying to hide that wealth and evade sanctions," the White House said.

Furthermore, the US will also slap new export controls on Russia, this time targeting "a broad range of inputs and products including wood products, industrial engines, boilers, motors, fans, and ventilation equipment, bulldozers, and many other items with industrial and commercial applications".

Control in place already have severely affected Russia's efforts to replenish the military weapons and equipment. Its top manufacturers of tanks, for instance, Uralvagonzavod Corporation and Chelyabinsk Tractor Plant are said to have halted work due to lack of foreign components. The US has also said, citing reports, more than 200,000 Russians, many of whom are highly skilled, have fled the country.

(The above story first appeared on LatestLY on May 08, 2022 10:29 PM IST. For more news and updates on politics, world, sports, entertainment and lifestyle, log on to our website latestly.com).