The company, which reported sales worth USD 4.2 billion last year, is responsible for 90 per cent of Russia's diamond mining capacity, which accounts for 28 per cent globally. It is owned one-third by the Russian government, and until recently, had an office in New York City. 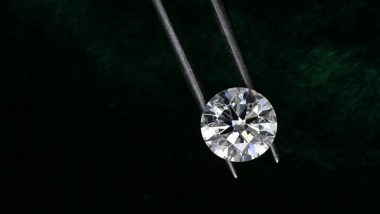 Washington, April 5: A bipartisan group of American lawmakers has sought the help of the Biden administration in restricting the international trade and sale of Russian-origin diamonds, in view of the massive sanctions that the US and its European allies have imposed on Moscow.

In a letter to Secretary of State Tony Blinken and Treasury Secretary Janet Yellen, the lawmakers expressed concern that the sanctions issued by the Treasury Department to target Russia's diamond industry will have a minimal impact on Alrosa and its CEO Sergei Ivanov's ability to freely operate globally.

The company, which reported sales worth USD 4.2 billion last year, is responsible for 90 per cent of Russia's diamond mining capacity, which accounts for 28 per cent globally. It is owned one-third by the Russian government, and until recently, had an office in New York City.

Ivanov is the son of one of Putin's closest allies, Sergei Borisovich Ivanov, who previously served as the Chief of Staff of the Presidential Executive Office, the Deputy Prime Minister and the Defence Minister of Russia and remains a permanent member of the Security Council of the Russian Federation, the letter said. Russian Currency Bounces Back After Moscow Mandates Payment for Gas in Gold-Pegged Ruble.

According to the Congressmen, the February 24 sanctions that listed Alrosa only blocked debt and equity transactions, making a small dent in Russia's oversized stake in the global diamond trade. Although an important initial step, along with the designation of Alrosa's CEO, these have yet to impede trade and revenues that eventually reach the Kremlin.

The administration also announced an import ban on March 11 which would ban “products of Russian Federation origin,” including non-industrial diamonds, from entering the United States.

“Experts note a “major loophole” remains in the sanctions regime that allows for importation of diamonds manufactured in India or elsewhere because of the interpretation provided in the Office of Foreign Assets Control's frequently-asked questions,” they wrote.

Namely, the term “Russian Federation origin” excludes goods “substantially transformed in a third country,” and it has long been the view of Customs and Border Protection that the cutting or polishing of diamonds in a third country would qualify as a substantial transformation.

“A recent report on the diamond industry indicated approximately 95 per cent of the world's diamonds are cut and polished in India. Thus, as it stands at this time, a diamond can be mined by an Alrosa subsidiary, polished or cut in India or another country, and sold to the United States without any prohibition, making a profit for the Russian government,” wrote the Congressmen.

The lawmakers asked that the Treasury Department reconsider the interpretation of origin that allows for the importation of diamonds from countries that may cut or polish Alrosa's diamonds.

“Second, the United States should work with its Indian counterparts, as well as those in trading centers such as Dubai, to ensure they are not being used to line the pockets of those closest to Vladimir Putin,” they said.

Finally, the State and the Treasury Departments should provide guidance to Customs and Border Protection (CBP) and the Department of Homeland Security (DHS) to ensure they prohibit the importation of Russian diamonds into the United States.

The lawmakers said that Putin's unprovoked and brazen invasion of the sovereign territory of Ukraine should be met with a forceful response from the United States and its partners.

“Luxury goods, especially items like diamonds that are used mainly for export to wealthy nations, should be among the first that Treasury and State Departments consider future action. “We ask for your consideration of additional actions that would constrain the Kremlin's capacity to access revenue from their diamond industry which could fund the invasion of democratic and sovereign Ukraine,” the letter added.