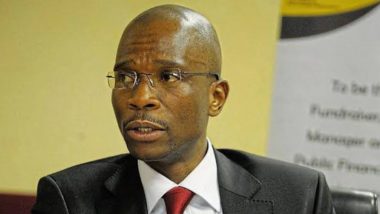 Cape Town (South Africa), August 1: The African National Congress's (ANC) integrity committee has ordered South African Deputy Finance Minister Dr David Masondo to 'voluntarily step aside' from his responsibilities in government. The integrity committee has also asked Dr Masondo to step down from his position of National Executive Committee following allegations that he used his influence as deputy minister to set the Hawks on a former lover.

Asking Dr Masondo to step down from his post and ANC, chairperson of the governing party’s integrity commission -- George Mashamba -- wrote, as quoted by Business Day, "Your actions have brought disrepute to the organisation, but in acknowledging this and taking responsibility, you have shown a commitment to the organisation and the ideals we strive to reach." German Defence Minister Annegret Kramp-Karrenbauer Says Withdrawal of Around 12,000 US Troops From the Country Is Regrettable.

Adding more, the letter says, "You are not an ordinary member of the public. You are a senior leader of the ANC and a deputy minister. You should have known that the mandate of the Hawks is to investigate corruption and offences that fall under the Prevention of Organised Crime Act. The demands that (the accuser) placed on you for money, while inconvenient to you, did not fall within the description of extortion under the act or within the mandate of the Hawks."

Apart from this, the integrity commission stated that the senior leader showed poor judgment and abused power by involving Hawks to settle a personal score with a former mistress by having her arrested for extortion. The ANC integrity commission had even thanked Dr Masondo for approaching the committee to look into the allegations levelled against him.

Earlier in 2019, allegations were levelled against Dr Mosondo of bullying the woman into having an abortion. He was also accused of tipping off the Hawks and getting arrested the woman outside her home in northern Johannesburg on August 17, while she was accepting a bag of cash from men she understood were representing Dr Masondo.

(The above story first appeared on LatestLY on Aug 01, 2020 11:59 AM IST. For more news and updates on politics, world, sports, entertainment and lifestyle, log on to our website latestly.com).