Sri Lankan President Gotabaya Rajapaksa on Monday swore in four ministers, hours after the Cabinet resigned en masse amidst a severe economic and political crisis in the island nation. 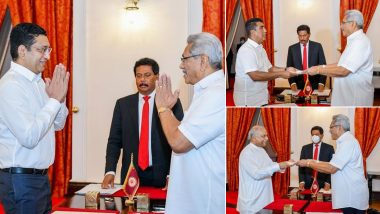 More ministers will be sworn into the cabinet in the coming days if the opposition parties agree to form a united government, government officials said.

Sri Lanka has for days been facing public protests calling for immediate measures to be taken by the government to solve the economic crisis, hours-long power cuts and shortages in fuel and other essential supplies.

Cabinet ministers offered to resign from their positions on Sunday night in response to calls from increasing protests amid economic instability and a severe fuel shortage in the South Asian country.

On Monday, President Rajapaksa extended an invitation to all political parties to join the government to find solutions to the ongoing crisis.

(The above story first appeared on LatestLY on Apr 04, 2022 02:44 PM IST. For more news and updates on politics, world, sports, entertainment and lifestyle, log on to our website latestly.com).