Tourism in the European Union (EU) during the year of the Covid-19 pandemic fell by a staggering 61 per cent, according to figures released by Eurostat, the statistical office of the bloc. 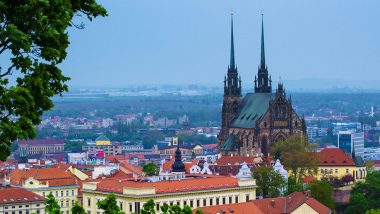 Brussels, June 26: Tourism in the European Union (EU) during the year of the Covid-19 pandemic fell by a staggering 61 per cent, according to figures released by Eurostat, the statistical office of the bloc. Friday's figures confirmed how tourism was among the sectors most affected by the pandemic due to travel restrictions as well as other precautionary measures taken by individual countries in response to the outbreaks, reports Xinhua news agency.

Eurostat said this drop was reflected in the number of nights spent in EU tourist accommodation establishments between April 2020 and March 2021. This translates into a drop of 1.7 billion from the 2.8 billion nights spent between April 2019 and March 2020, prior to the start of the pandemic. European Union’s Domestic Tourism Recovers Faster Than Foreign Tourism Amid COVID-19 Pandemic.

Among the EU member states with available data, the highest decreases were recorded in Malta, where tourism dropped by a massive 80 per cent; Spain, down by 78 per cent; and Greece, down by 74 per cent. Tourism shrank by 70 per cent in Portugal, and 66 per cent in Hungary.

Eurostat said data for Ireland, France, and Cyprus were not available. The pandemic also had an adverse effect on internal tourism, with the total nights spent by domestic tourists down by 45 per cent. This was not the case in Malta and Slovenia, the only two EU countries where internal tourism increased by 20 and 25 per cent, respectively, in the year under review.

(The above story first appeared on LatestLY on Jun 26, 2021 02:34 PM IST. For more news and updates on politics, world, sports, entertainment and lifestyle, log on to our website latestly.com).