Even if India has not "aligned" with Russia, and has kept a relatively balanced position during the Russia-Ukraine conflict, the US does not buy it, Global Times reported. 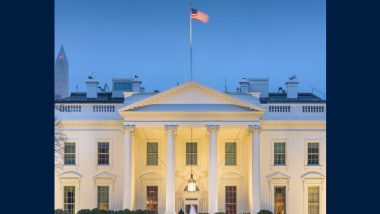 Beijing, April 9: The US is afraid that ties among China, Russia, and India may further develop due to the Ukraine crisis, Chinese state media has said.

As White House top economic adviser Brian Deese claimed that the consequences of New Delhi's "more explicit strategic alignment" with Moscow would be "significant and long-term", Global Times termed this an open threat by the US toward India on the latter's own business.

"When it comes to the Ukraine crisis, the US is blatantly displaying its hegemonic mentality - either you are with the US, or against the US. This echoes exactly the same slogan of George W. Bush, made in the wake of the 9/11 attacks," said Zhao Gancheng, a research fellow at the Shanghai Institute for International Studies.

The US is again telling the world: As a superpower, it has the right to define who you are. COVID-19 Variant XE in India: First Case of Omicron Sub-Variant XE Detected in Gujarat After Elderly Man From Mumbai Found Infected.

Even if India has not "aligned" with Russia, and has kept a relatively balanced position during the Russia-Ukraine conflict, the US does not buy it, Global Times reported.

"Remaining neutral makes no sense to the US. What Washington wants from New Delhi is completely standing by the side of the US," Zhao said, the report said.

Before Deese's remarks, the US has already warned India more than once against constructing alternate payment mechanisms with Russia or buying more oil from Russia. Yet the threats turned out to be in vain, as India benefits from its ties with Russia, which can't be substituted by the US, Global Times reported.

Also, India's response mirrors an increasingly obvious trend - the US has underestimated the antipathy the rest of the world holds for it. Not only India, but the majority of the general public in China and Latin American countries and other developing world have not taken sides with the US in the Russia-Ukraine conflict, even if the US believes it is standing on the moral high ground, it added.

(The above story first appeared on LatestLY on Apr 09, 2022 06:03 PM IST. For more news and updates on politics, world, sports, entertainment and lifestyle, log on to our website latestly.com).