Nearly 190 people were shot dead across the US over the July 4th or Independence Day holiday weekend, according to data compiled by the Gun Violence Archive, a research organisation. 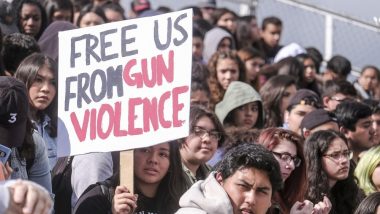 Washington, July 7:  Nearly 190 people were shot dead across the US over the July 4th or Independence Day holiday weekend, according to data compiled by the Gun Violence Archive, a research organisation.

By Monday, the non-profit group reported that 189 people were killed and 516 were injured in more than 540 shootings over the three-day weekend that started on July 2, US media outlet NPR said Tuesday after reviewing the data, noting that those numbers may go up as the organisation is continuing to collect additional information.  US President Joe Biden Unveils New Anti-Crime Strategy Amid Soaring Gun Violence Across the Country

The Chicago Tribune newspaper reported that at least 95 people were shot in the city during the long weekend, and among those injured were two police officers, reports Xinhua news agency.

In New York, there were 26 victims from 21 shootings from July 2-4, the New York Police Department said.

In Norfolk, eastern state of Virginia, police have charged a 15-year-old boy in the weekend shooting of four children between the ages of 6 and 16 on July 2, said the NPR report.

Police in Cincinnati, Ohio, said two males aged 16 and 19 respectively who were "engaged in a verbal altercation that resulted in the two exchanging gunfire" were shot dead, and three others were injured at a holiday celebration at a park on July 4.

In Toledo, Ohio, a 17-year-old boy was killed when a block party was disrupted by gunfire early Monday, according to police. At least 12 people were hurt in the shooting.

On July 4, at least eight people were shot and injured after an argument broke out in Fort Worth, Texas, local media reported.

On the same day, five men were found shot in Dallas, Texas, and three of them later pronounced dead.

Two other gunshot victims were also found on the course and police are still looking for the suspect.

Through the first 172 days of 2021, gun violence killed 9,420 Americans, an average of 55 people a day, according to the Gun Violence Archive.

The figures include homicides and accidental gun deaths but not suicides.

A sample of 37 .S cities with data for the first three months of this year saw an 18 per cent spike in murders compared with the same period in 2020, according to an earlier New York Times report.

Many experts already predicted that gun violence will get even worse this summer, when it historically goes up with the arrival of warm weather.

Furthermore, most states have relaxed Covid restrictions after months of shutdowns.

(The above story first appeared on LatestLY on Jul 07, 2021 02:22 PM IST. For more news and updates on politics, world, sports, entertainment and lifestyle, log on to our website latestly.com).