US: Naked Woman Runs Across School Sports Field in Front of Minor Students, Sent to Jail

A young woman in the United State was booked and arrested after she ran naked in front of a group of minor students. The incident took place on October 15 at Helias Catholic High School in Jefferson County. 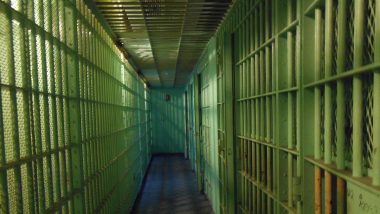 Jefferson County, October 20: A young woman in the United State was booked and arrested after she ran naked in front of a group of minor students. The incident took place on October 15 at Helias Catholic High School in Jefferson County, Missouri. The accused woman has been identified as Lacey Uthe. She was taken to a hospital for an evaluation before being sent to Cole County Jail. Viral News: Naked Woman Drives Golf Cart Through Crime Scene After Crashing Armed Standoff in Florida, Arrested.

Uthe allegedly jumped over the football stadium fence in the school. She was seen running naked across the sports field where students were participating in a youth programme, according to a report by The Daily Star. She was only wearing a scarf. The incident happened before a group of eighth-graders, who are normally aged between 13 and 14.

Uthe is said to have told an officer that she had left her home naked in search of help because she ingested heroin. She said she thought she would die. According to a local news outlet KMIZ, she was arraigned on a charge of sexual misconduct involving a child under 15. It is a class E felony, which could be punished by prison time.

Denver International Airport had reported a similar incident last week. A naked woman, who appeared to be drunk, was seen walking casually and trying to interact with bystanders around Gate A-37. In a video of the incident, officers were seen following the naked woman with a large blanket in an attempt to get her to cover up. She was smiling and laughing as officers tried to wrap the blanket around her.

"How are you doing? Where are you from?" she asked bystanders who were recording her. Eventually, she was taken to a medical facility because the authorities believed she was experiencing a mental issue at the time.

(The above story first appeared on LatestLY on Oct 20, 2021 02:46 PM IST. For more news and updates on politics, world, sports, entertainment and lifestyle, log on to our website latestly.com).