US President Joe Biden announced an additional $800 million in security assistance to Ukraine, which will include heavy artillery weapons, howitzers, ammunition and tactical drones. 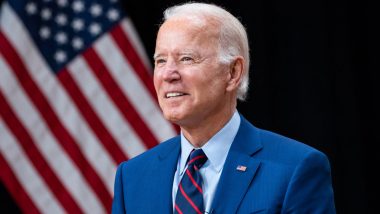 Washington, April 22: US President Joe Biden announced an additional $800 million in security assistance to Ukraine, which will include heavy artillery weapons, howitzers, ammunition and tactical drones.

Biden made the announcement on Thursday shortly his meeting with visiting Ukrainian Prime Minister Denis Shmyhal during which they "discussed recent developments in Russia's brutal war of aggression against Ukraine", according to a White House statement. In his announcement to mediapersons, the President said the additional assistance was "to further augment Ukraine's ability to fight in the east � in the Donbas region".

Biden claimed that since the war started on February 24, the US has so far sent "thousands of anti-armour and anti-(air) missiles, helicopters, drones, grenade launchers, machine guns, rifles, radar systems", as well as "more than 50 million rounds of ammunition".

"The US alone has provided 10 anti-armour systems for every one Russian tank that's in Ukraine � a 10 to 1 ratio." The President said that the US also intends to "provide an additional $500 million in direct economic assistance to the Ukrainian government. This brings our total economic support for Ukraine to $1 billion in the past two months".

Biden also announced the launch of the "Unite for Ukraine" programme which will enable Ukrainians seeking refuge to come directly from Europe to the US. ‘US President Joe Biden Will Not Visit Ukraine’, Says White House Press Secretary Jen Psaki.

"This new humanitarian parole programme will complement the existing legal pathways available to Ukrainians, including immigrant visas and refugee processing. "It will provide an expedient channel for secure, legal migration from Europe to the US for Ukrainians who have a US sponsor, such as a family or an NGO," he said.

In an effort to put more pressure on Russia to stop the war, Biden said the US will ban Russian-affiliated ships from American ports.

"That means no ship, no ship that sails under the Russian flag or that is owned or operated by Russian interests will be allowed to dock in a US port or access our shores. None..."

(The above story first appeared on LatestLY on Apr 22, 2022 11:09 AM IST. For more news and updates on politics, world, sports, entertainment and lifestyle, log on to our website latestly.com).