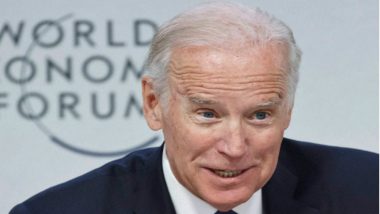 Washington, Sep 26: Democratic presidential nominee Joe Biden has said that US President Donald Trump will leave office if he loses the November 3 election, according to media reports.

"I just think the people in the country are going to be heard on November 3," The Hill news website quoted the former Vice President as saying on MSNBC on Friday.

"Every vote in this country is going to be heard and they will not be stopped. I'm confident that all of the irresponsible, outrageous attacks on voting, we'll have an election in this country as we always have had, and he'll leave," he added.

Biden's remarks came after Trump earlier this week refused to commit to a peaceful transfer of power if he does not win the election and also suggesed that the result will be challenged in court.

The White House has played down his comments, saying the President will accept the outcome of a "free and fair" election.

But on Thursday, the Republican-majority Senate passed a resolution reaffirming its commitment to a peaceful transition of power.

The non-binding resolution reaffirmed the Senate's commitment to "the orderly and peaceful transfer of power called for in the Constitution of the US", adding that "there should be no disruptions by the President or any person in power to overturn the will of the people of the US".

Several Republican Senators have also pushed back the President's remarks that he's "going to have to see what happens", including Majority Leader Mitch McConnell who said that "the winner of the November 3 election will be inaugurated on January 20th".

"There will be an orderly transition just as there has been every four years since 1792,: the Trump ally tweeted on Thursday.

Trump is currently trailing Biden nationally by 10 points, according to latest polls. Surveys showed tight races in a number of key battleground states.

(The above story first appeared on LatestLY on Sep 26, 2020 12:31 PM IST. For more news and updates on politics, world, sports, entertainment and lifestyle, log on to our website latestly.com).