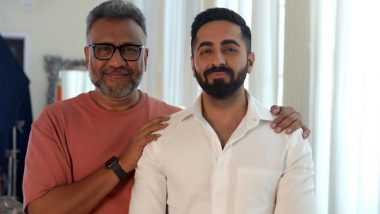 Actor Ayushmann Khurrana has concluded shooting for his next feature film Anek. The action-thriller movie reunites Khurrana and filmmaker Anubhav Sinha after their 2019 critically-acclaimed feature Article 15. The 36-year-old actor took to Instagram on Friday evening to share the news alongside a series of photos from the sets of the film, including his last shot, a picture with the director and his core team. Anek: Ayushmann Khurrana Heads to Delhi for Shooting the Last Schedule of Anubhav Sinha’s Film.

"It's a wrap! #Anek is very very special. It's full of surprises. An untouched subject. A very important new age cinema," Khurrana captioned the post. "Why do I get emotional on the last day of shoot? Coz I will never get to play that character again. I will miss playing Joshua. I will miss North East,” he wrote. Anek: Ayushmann Khurrana Wraps Shillong Shoot Schedule of Anubhav Sinha Directorial.

Backed by Sinha's Benaras Media Works and Bhushan Kumar's T-Series, the film is set to release on September 17.  Khurrana has also a romantic drama, titled "Chandigarh Kare Aashiqui", up for release in theatres on July 9. The Abhishek Kapoor-directed movie will also feature Vaani Kapoor.